Against the Windies, Dhoni s 61-ball stay was laced with three boundaries and two sixes.

MS Dhoni, who’s slow batting approach against Afghanistan in the ICC World Cup 2019, drew plenty of flak, found backing from his captain Virat Kohli after the veteran wicketkeeper-batsman s 56* pushed India to 268/7 against West Indies at Old Trafford on Thursday at a time when they were in a spot of bother at 140/4 in the 29th over.

Against Afghanistan, Dhoni took 52 balls to score 28 runs which had reduced India’s scoring rate in the middle overs and they managed to score just 224 runs in their allotted 50 overs. However, against the Windies, the former captain s 61-ball stay was laced with three boundaries and two sixes.

Asked about Dhoni s approach to his batting, Kohli said that the Indian team s think tank has full faith in his capabilities.

Dhoni knows exactly what he wants to do in the middle. When he has an off day here and there, everyone starts talking. We always back him. He has won us so many games, Kohli said at the post-match presentation ceremony. (ALSO READ: High-flying India knock West Indies out with emphatic win)

The best thing about having someone like him is when you need those 15-20 runs, he knows exactly how to get them. His experience, 8 out of 10 times has come good for us. We have quite a few players who play instinctive cricket and follow their game plans. He’s such a keen understanding of the game. Always sends us feedback, that you know 260 is a good score. He’s a legend of the game. We all know that. Just hope he can continue. (ALSO READ: Virat Kohli quickest to 20,000 international runs)

Last two games, things haven’t gone like we thought they would. These haven’t been massive scoring games. But we’ve found ways of winning. Intensity has been the standout thing for me. Mindset really matters. Nothing is impossible. We feel we can win from any situation. Vic Marks on England's 1984-85 tour to India, his TMS debut in Delhi, a World Cup record and his memoir 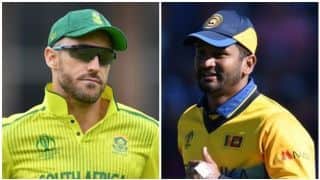