Sunil Ambris will join the Jason Holder-led West Indies side as a replacement of Russell.

West Indies allrounder Andre Russell on Monday was ruled out of the remainder of the ICC Cricket World Cup 2019 due to knee injury. Sunil Ambris will join the squad as Russell’s replacement.

Russell, who was brought into the team following his heroics in the Indian Premier League (IPL) 2019 for Kolkata Knight Riders (KKR), features in three matches in the ongoing World Cup. However, he failed to repeat his IPL heroics and could only score 36 runs in three innings and scalped five wickets in the four matches he played.

“BREAKING: Andre Russell has been ruled out of the rest of #CWC19 through injury. Sunil Ambris will join the West Indies squad as his replacement,” tweeted Cricket World Cup.

BREAKING: Andre Russell has been ruled out of the rest of #CWC19 through injury. Sunil Ambris will join the West Indies squad as his replacement.#CWC19 | #MenInMaroon pic.twitter.com/BuhWdjskzq

Russell though did not feature in his team’s last game against New Zealand, the one where Carlos Brathwaite, with his 82-ball 101-run knock, almost powered West Indies to win.

The Jason Holder-led unit has registered only one win from their six games, suffering four defeats in addition to a washout. While the team can still make it to the semifinals, they will have to win their remainder of the games and then hope that the results of the other matches go in their favour.

Ambris will join the team ahead of their next game against India on June 27 at the Old Trafford. The 26-year-old has played six ODIs and averages 105.33, with one international hundred against his name. He scored that ton against Ireland during the tri-nation series involving Ireland and Bangladesh ahead of the World Cup 2019. 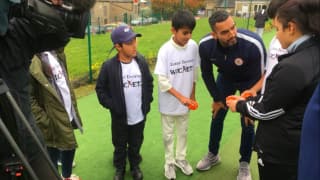