A rejuvenated Aaron Finch is feeling as good as he ever has playing for Australia.

LONDON: When the ODI leg of Australia‘s home summer came to a close in January, a period in which they lost series to South Africa and India, their skipper Aaron Finch was at the crossroads. His white-ball form had deserted him and his brief run as a Test batsman had come to an end.

In his head, Finch had started to wonder whether he would still be Australia’s limited-overs captain when time came for the selectors to name the squad for the ICC Cricket World Cup 2019.

Today, five matches into Australia’s campaign in England, Finch is the tournament’s leading run-getter and has hit the most sixes (14) so far. His team sits atop the World Cup points table.

On Saturday at Kennington Oval, Finch equalled his ODI best with 153 off 132 balls to set up Australia’s 87-run win.

This latest hundred – his 14th in ODIs – is his eighth score in excess of 50 in 13 innings. And it continues an amazing run of form from a man who went 21 limited-overs innings without a half-century before he scored 93 in an ODI against India in March. That 93, not without coincidence, revived Finch’s batting and the fortunes of the Australian ODI team. They won that match and overturned, dramatically, a 0-2 deficit to beat India 3-2 for their first bilateral ODI series win in over two years.

For Finch, the turnaround came during Australia’s 5-0 ODI sweep of Pakistan in the UAE after the tour of India.

“I think the time in Dubai, or in the UAE this year against Pakistan was really good. The end of the Indian series was really good, as well, in the one-days. I probably just changed my mind-set a little bit more than anything,” he told reporters after the win over Sri Lanka. “I started to doubt my game a lot before that in the Australian summer and there was a lot of times when I was just questioning every single decision that I was making, whether it was technical, mental, physical.

During the home summer, Finch managed 26 runs in three ODIs against India. In the Tests that preceded that series, he managed 97 runs across six innings and was dropped for the fourth and final match. He was also overlooked for the two-Test series against Sri Lanka and doesn’t see himself making Australia’s Test squad anytime soon.

But to be here, at the World Cup, scoring runs that help Australia win matches, is pure joy for Finch. Being in a hole, with his technique exposed by India’s pace bowlers, was an awakening for him. Losing his Test place did not prove a deterrent, and with the selectors’ and team management’s faith, Finch has produced the goods.

“It was a really great learning for me over the summer,” he said. “Obviously would have been nice to have that at 22 and not 32, but I think overall, what I learned was you can strip it back as much as you want, but it doesn’t change the basics of the game. The basics is an opening batter to go out there and defend the good ball and score runs.

“So for me, I was looking for everything other than just what the most basic thing, which is watch the ball and react to it. I mean, you can butter it up any way, but I was just going back to the basics, going back, doing a little bit of mental work on changing my mind-set to just be positive.”

Finch, pleased to have got big hundred against Sri Lanka, is feeling as good as he ever has playing for Australia.

“I think any time that you manage to get a few runs, you feel pretty good about your game,” he said. “My technique’s probably tightened up slightly. There’s been a few technical things I’ve worked on that are just working at the moment. Sometimes, sometimes you change some things, but you don’t get rewarded straightaway with the hard work you put in in the nets and behind the scenes.

That positive reinforcement has come because Finch was allowed room to improve, because he had the Australian setup’s faith and because he put in a lot of hard work. The personal joys are plain for all to see, and thanks in no small part to Finch Australia are a rejuvenated ODI team. 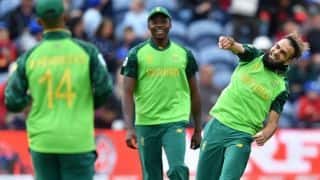 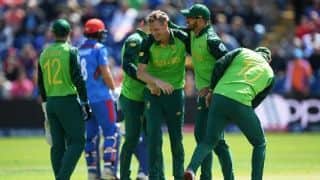