Williamson was distraught but was still graceful as he along with any member of the New Zealand side walked away without making any stinging remark.

New Zealand had luck as their worst enemy on July 14 during the ICC Cricket World Cup 2019 final against England after being awarded four runs when a Martin Guptill throw inadvertently touched Ben Stokes bat and the rest they say was history.

India head coach Ravi Shastri heaped praise on BlackCaps captain Kane Williamson for his composure as he led a Kiwi led in a heart-breaking final. New Zealand went down at Lord s due to inferior boundary count after the Super Over as well ended in a tie.

Williamson was distraught but was still graceful as he along with any member of the New Zealand side walked away without making any stinging remark.

Shastri lauded Williamson for his demeanour on the field. “Your composure and dignity viewing the sequence of events was remarkable. Your dignified grace and silence 48 hours since is simply remarkable. We know you have one hand on that WC. You not just Kane. You Kane and Able. God bless. #CWC19,” he tweeted. (ALSO READ: Did Ben Stokes ask umpires to cancel overthrown boundary in final?)

Williamson, who scored 578 runs at an average of 82.57, won the Player of the Tournament, but what struck most was the manner in which he conducted himself and led his team throughout the tournament.

Meanwhile, Shastri and the coaching staff of the Indian team were given a 45-day extension following the World Cup which runs for the West Indies tour from August 3 to September 3. (ALSO READ: MS Dhoni will not tour, set to groom Rishabh Pant henceforth)

Shastri will get an automatic entry in the recruitment process. The last date for applying is on July 30, 2019 by 5 pm.

It will be interesting to note that the last time, the deadline had to be extended as final choice Shastri had not applied for the position till the deadline got over. In fact, it was believed that former India opener Virender Sehwag was among the most eligible candidates from the new set of applicants apart from then coach Anil Kumble. 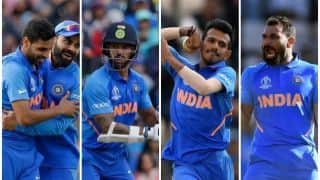