Despite dropping six catches, Pakistan ended up winners by 49 runs on Sunday.

LONDON: The Pakistan cricket team will live to see another day in the ICC Cricket World Cup 2019 after beating South Africa at Lord’s on Sunday, on the back of a total of 308 and some restrictive bowling from Mohammad Amir and Shadab Khan.

This is not to say they didn’t try to lose. Pakistan dropped six catches – yes, six – in another quixotic effort in the field. They still ended up winners by 49 runs, which speaks of the gulf between their batting and bowling and that of South Africa, who are now officially out of the World Cup.

Needing to win all four of their remaining matches in the World Cup, Pakistan have ticked off one team. New Zealand, Afghanistan and Bangladesh remain. Cornered tigers, anyone?

On a fresh pitch Lord s pitch wearing the slightest tinge of green, in the first game of the tournament at cricket s spiritual home, Pakistan chose to bat. Fakhar Zaman and Imam-ul-Haq began well with an opening stand of 81, then fell for identical scores of 44 to Imran Tahir. Mohammed Hafeez kept sweeping like it was a shot going out of business. The man who looked the likeliest to hold it all together, Babar Azam, eased to 69 before he picked out the cover sweeper.

Haris Sohail got a game in place of the out-of-form Shoaib Malik is his ODI career over? and cracked 89 from 59 balls while fashioning the second-fastest half-century partnership of the tournament with Imad Wasim.

A stand of 87 off 109 balls between Faf du Plessis and Quinton de Kock was as good as South Africa could muster, and once the pair was separated by Shadab the chase lost steam as Wahab Riaz produced some reverse-swing to mop up the tail.

This was, undeniably, a victory set up in the first half. A busy start from the Pakistan openers raised visions of 330. Fakhar s eyes lit up at the sight of room, hammering Kagiso Rabada into the legside in the third over and lacing him backward of point during the fifth. In Lungi Ngidi s second over, Imam forward-pressed three delightful fours into the offside, between cover and point. Ngidi was forced to bowl short as a result of those shots and Fakhar swung him for six over square leg. Six overs, Pakistan 44 for none.

On came Chris Morris, and Imam pushed him past mid-off to raise Pakistan s 50. Then he lunged forward and edged between de Kock and Amla for four more.

On 31, Fakhar pulled Morris out to deep midwicket where Imran Tahir dived forward and celebrated the catch animatedly. But when replays showed the ball had hit the grass just as he tried to his fingers under it, the Pakistan fans roared. Some of them booed Tahir, born in Pakistan. The very next ball, Fakhar cut Morris between Tahir and fine leg for four.

As it panned out, Tahir struck the first blow when he had Fakhar (44) mistiming a lap-sweep to Amla at slip in his first over. Pakistan s run rate dipped after that wicket, and when Tahir held a low return catch to send back Imam (44) in his fourth over, the innings dipped further. That catch made Tahir the leading South Africa bowler in World Cup history with 39, surpassing Allan Donald s mark of 38.

Babar kept his cool, displaying assured footwork and quick hands to perforate the gaps in the field and hit the occasional eye-catching boundary, most strikingly a driven four off Ngidi.Hafeez swept Tahir for six, repeated the shot next ball and survived a review for lbw and then fell for 20 to Aiden Markram s offspin when he tried another sweep and was given lbw.

Haris signalled his ambitions by driving Rabada down the ground for four and slashing over cover-point for six. The loss of Babar didn’t impact Haris, who ramped Morris for four to third man to raise his fifty in 38 balls. He then trained his aggression towards Andile Phehlukwayo, whom he lofted over mid-off for six and swiped to fine leg for four. Imad walked into his first ball faced and thumped it past extra cover for four, setting in flow a cameo of 23 from 15 balls in a stand of 71 in 40 deliveries.

Needing 12 from the last over for his third ODI century, Sohail got on strike with four balls left. He got a single, then off the penultimate ball top-edged Ngidi and was out. No century, but a match-setting 89 to help keep Pakistan alive.

South Africa struggled to get partnerships going. In the first over, Wahab spilled a diving catch to his right at mid-off when de Kock charged at Hafeez first ball. Amir began the second over by successfully reviewing a not-out verdict against Amla. In the ninth over, Shadab at point failed to hold onto a thick edge from du Plessis off Shaheen Afridi.

Wahab’s first three overs cost just eight runs, as a clever mix of short balls and length deliveries kept de Kock quiet. In his fourth, Wahab was squeezed past point for four and swung wide of fine leg for six by de Kock. Blood rushing after those consecutive boundaries, de Kock slogged Shadab to deep square leg where Imam took a low catch. After 20 overs, the asking rate for South Africa was 7.23.

Pakistan’s grip was tightened when Shadab produced a top delivery to Markram, the resultant cut shot completely missing it. A misjudged catch by Amir at long-off when Rassie van der Dussen slogged Shadab momentarily darkened the mood, but the same bowler was called back and had du Plessis top-edging to Sarfaraz Ahmed. A second chance presented itself to Amir when David Miller popped back a return catch, but it was fluffed.

With 15 overs left, the required run-rate had reached 9.93. Wahab returned, produced the edge of van der Dussen’s bat but Sarfaraz spilled the catch. Then he kicked the ground when Amir dropped Miller at third man next ball. Out of the comic scenes unfolding at Lord’s, Hafeez called for a skier and took it, thus sending van der Dussen on his way and giving Shadab his third.

Afridi ended all signs of resistance by bowling Miller for 31 in the 41st over, and Pakistan closed in. Wahab’s deliciously curving deliveries rattled the stumps thrice in his last spell of 3/8 in three overs. 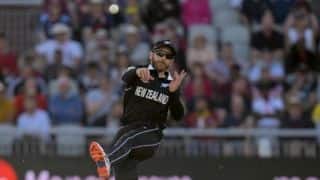