A ‘rematch’ of the 2019 ICC Cricket World Cup final between winners England and runners-up New Zealand is a remote possibility, but not something that the two boards have spoken to ahead of their series scheduled series later this year, says New Zealand Cricket (NZC) chief executive David White.

On July 14 at Lord’s, England were crowned World Cup winners after New Zealand drew level with their Super Over total following a tied result at the end of regular playing time. The decision to award England the World Cup on boundary count has been widely criticised, as was the awarding of six runs to England’s total when a throw from the deep ricocheted off Ben Stokes’ bat and went to the boundary.

The former umpire Simon Taufel said that England should only have got five as the batsmen had not crossed for their second run when the throw was made. After the controversial final, New Zealand coach Gary Stead called for the World Cup’s rules to be overhauled, labelling the showpiece final “hollow” after England defeated the Black Caps on a technicality.

New Zealand are due to host England for two Test matches and five T20Is in October-November this year. Asked during a chat show on Radio Sport about the possibility of changing one of the T20Is into a ‘grudge match’ ODI, White replied: “It’s not on the table at the moment. It’s a novel idea. We’ve agreed to T20s at this stage in preparation for the World Cup in the next 12 months but it’s certainly a novel idea.”

The two Test matches between New Zealand and England later this year are not part of the ICC World Test Championship, because the series was scheduled before the new competition was created. And given that the five T2oIs are not part of either team’s qualification for the 2020 T20 World Cup, White saw reason for one of the games to be changed to an unprecedented World Cup ‘rematch’.

“These ones actually can be agreed amongst the countries because they’re not part of the Test match championship or not part of qualification for the next [T20] Cricket World Cup, that starts in 12 months time,” said White. “So it’s possible. Interesting.” 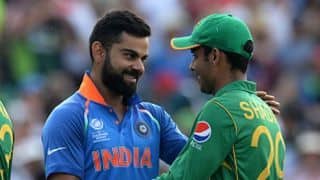 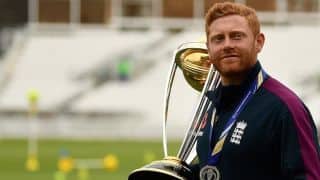