BIRMINGHAM: After being put into bat by Kane Williamson, South Africa‘s innings meandered to 241/6 in 50 overs at Edgbaston as New Zealand‘s bowlers struck regular blows and fielded tigerishly – despite two dropped catches – on a somewhat sluggish batting surface.

Early morning rain delayed the start of match 25 of the ICC Cricket World Cup 2019 from 10:30am to noon, and having won the toss, New Zealand put in a disciplined performance to limit South Africa’s batsmen from free-scoring business. Hashim Amla and Rassie van der Dussen were the only ones to cross 50, while Aiden Markram and David Miller threw away starts.

Leading the way for the Blackcaps was Lockie Ferguson, who cranked up top speeds and was the most successful bowler with 3/59, figures bruised somewhat by van der Dussen in the final over of the innings.

Trent Boult struck the first blow in the second over when Quinton de Kock (5) missed a length ball and was bowled when attempting to whip it to midwicket. Matt Henry bowled quick and tidily in an opening spell of 7-2-18-0, during which he had Amla and Faf du Plessis swaying and leaving. At the end of the Powerplay, South Africa were 40/1. In that time, just six boundaries were hit.

Both Amla and du Plessis mistimed several shots: hard-handed drives were chopped square on the off side, inside-edges snuck into the leg side, back-foot punches dribbled off the pitch. With a push for two off Ferguson in the 12th over, Amla became the second-fastest batsman to 8,000 ODI runs after Virat Kohli. Some shots were timed well, such as Amla’s slice past backward point for three off Lockie Ferguson and a slap off the same bowler for four by du Plessis to raise the 50-run stand in 71 balls.

But in that same over, Ferguson had his man when a very quick yorker snuck under du Plessis’ bat. The South African skipper made 23 off 35 balls. The setup was beautiful. The ball before was a bouncer, clocked at 149kph.

After scores of 13, 6, 6 and 41* not out, Amla scored his first ODI half-century in six innings. It was raised off 75 balls, courtesy his fourth four, which was an aerial whip wide of mid-on off Colin de Grandhomme. But forced to turn over singles against Mitchell Santner’s left-arm spin, Amla tried to manufacture a shot to third man and was bowled for 55.

Markram, also bogged down by Santner’s restrictive lines, tried to break out but wasn’t fluent. On 32, he was dropped by Boult at deep square leg off de Grandomme but the miss didn’t cost much. On 38, Markram charged out to de Grandhomme and skied the ball to deep cover. De Grandhomme bowled his ten overs for just 33 runs, which was golden on the track.

Miller flexed his muscles to clout Boult for six and then Ferguson for consecutive fours, but like the others he fell before he do serious damage. Looking to uppercut Ferguson, Miller was well held by Boult on the run at third man.

Van der Dussen eased to his fifty off 56 deliveries, and kept swinging after Ferguson added Andile Phehlukwayo to his kitty. The economical Henry should have had van der Dussen on 56, but Ferguson dropped him at fine leg. The batsmen thanked Ferguson by clubbing him for six and four in the last over. 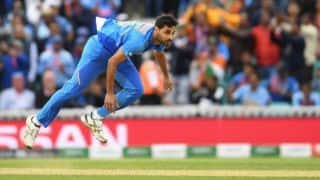 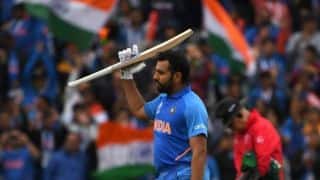