There is some magic connection between No.7 and love for football.

There is some magic connection between No.7 and love for football. Cristiano Ronaldo has donned the jersey number for years and so as MS Dhoni. While Ronaldo has no cricket connections, it’s a well known fact that Dhoni’s first love was football and he was a goalkeeper during his early school days before his coach introduced him to wicketkeeping. Thankfully that happened and as they say, the rest is history. From being a world class competitor to being India’s most successful captain, Dhoni is back at the helm for Chennai Super Kings (CSK) for IPL 2018.

Dhoni, who has often participated in charity football games, exhibited his prowess with the ball during one of the practice sessions at CSK camp. In the video posted by CSK’s official Twitter handle, Dhoni and a member of the CSK coaching staff, Tommy Simsek, were seen juggling a football, passing it to each other without dropping it.

CSK compared their thala to Ronaldo as they wrote, “CR7 nahi, MS7 bolo.” Ronaldo has been on trends since past two days for his astounding goal for Real Madrid in their Champions League game against Juventus. The Madrid side won 2-0. Ronaldo, one of the finest forwards the game has seen, pulled a stunner courtesy bicycle kick.

“AND THEN RONALDO!! WHAT A GOAL FROM CRISTIANO RONALDO!”

Coming to cricket. Dhoni’s CSK were banned from IPL for their involvement in spot-fixing scandal for two years. Dhoni played for Rising Pune Supergiant (RPS) in the last two seasons, before returning home, to CSK, as their captain.

The IPL goes underway on Saturday with CSK taking on defending champions Mumbai Indians (MI) at the Wankhede Stadium, Mumbai. 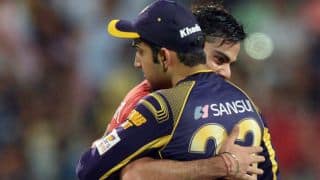 IPL 2018: Full list of live streaming and broadcasting TV channels in India and across world