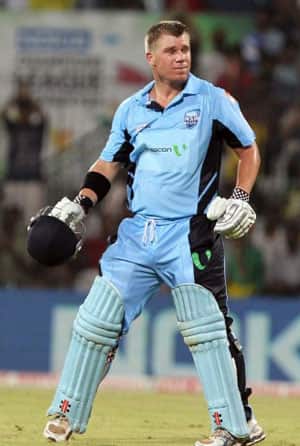 Electing to bat, New South Wales posted an imposing 201 for two, riding on Warner’s 69-ball 135 not out, and Chennai needed to chase down the target in 17 overs if they were to qualify for the semifinals from Pool A.

Chennai, however, managed to score 155 all out in their last league match.

After today’s match, NSW and the Mumbai Indians qualified for the semifinals after having collected six and five points respectively at the end of their league engagements.

Chennai could only win one out of their four matches and finished at the bottom of the five-team Pool A.

Trinidad and Togabo, who defeated Cape Cobras in another Pool A match today, failed to qualify for the last-four stage as they ended their league engagements on four points.

Chasing a daunting target, Chennai made a strong start with openers Mike Hussey (37) and Murali Vijay (17) adding 55 runs for the first wicket before they lost the way later on.

The openers departed in the space of seven balls with Hussey was the first to depart while Vijay followed soon after. Hussey’s 27-ball cameo consisted of seven fours.

Steve O’ Keefe, who picked up the key wicket of Vijay proved it was no fluke by accounting for another top batter, Suresh Raina (28) to leave Chennai reeling at 88/3 after 10 overs. Raina hit one six and five fours in his 14-ball stay at the crease.

Skipper M S Dhoni (2), who came in with his side at 67 for two, could not provide the fireworks for the defending champions being caught by Steven Smith off Moises Henriques at long off. (PTI)

Man of the match David Warner.

Justin Kemp blames bowlers for the loss against Trinidad & Tobago