Chennai Super Kings overcame a slow start courtesy Suresh Raina (59) and Faf du Plessis’ (39) 83-run stand for the second wicket in 66 balls and a late blitz powered by MS Dhoni (44* off 22 balls) and Ravindra Jadeja (25 off 10 balls), to post 179/4 against Delhi Capitals in Match 50 of IPL 2019 at the MA Chidambaram Stadium on Wednesday.

After CSK found themselves 27/1 in the first six overs, with Shane Watson recording an eight-ball duck, Raina and du Plessis kept the Delhi Capitals spinners at bay – three off them, Jagadeesha Suchith, Axar Patel and Amit Mishra. Raina notched up his 37th IPL fifty, his 50th in T20s with the help of eight fours and a six while du Plessis was a tad slow, taking 41 balls for his 39 runs.

But their association laid the platform for a late fourish and Jadeja provided that with a 10-ball cameo, before falling to Chris Morris. MS Dhoni, who said he was not 100 per cent fit during the toss, finished off the innings well. In the last five overs, CSK ransacked 77 runs as DC were guilty of being sloppy with the bowl and the field in the death overs. Trent Boult’s final over was taken for 21 runs with Dhoni smashing two sixes and a four.

CSK had such a slow start that they got in to double figures only in the fifth over. Boult, playing in place of a rested Kagiso Rabada, send down a tidy first spell of 2-0-2-0 while Suchith’s two yielded just five runs.

Watson, after playing a dot of Boult and four dots off Suchith, tried to get going with a hoick off a half-tracker off Suchith but found Axar Patel at deep midwicket.

DC captain Shreyas Iyer had won the toss and elected to bowl. DC brought in Suchith and Boult while Rabada was rested. For CSK, Dhoni, du Plessis and Jadeja were back after missing the previous game. 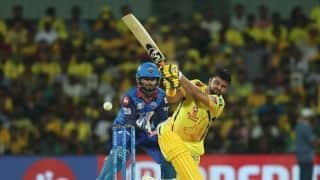 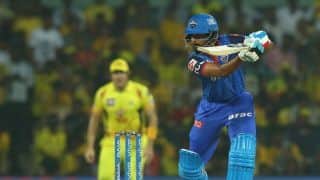