Mumbai Indians rode on skipper Rohit Sharma's 48-ball 67 but and Hardik Pandya's 18-ball 23 to post 155/4 in Match 44 for IPL 2019 against Chennai Super Kings at the MA Chidambaram Stadium, Chennai on Friday, with Chennai bowlers a putting in a disciplined bowling effort led by spinners Mitchell Santner (2/13) and Harbhajan Singh.

Mumbai Indians rode on skipper Rohit Sharma‘s 48-ball 67 but and Hardik Pandya’s 18-ball 23 to post 155/4 in Match 44 for IPL 2019 against Chennai Super Kings at the MA Chidambaram Stadium, Chennai on Friday, with Chennai bowlers putting in a disciplined bowling effort led by spinners Mitchell Santner (2/13) and Harbhajan Singh.

After CSK captain Suresh Raina won the toss and elected to bowl first, without MS Dhoni and Ravindra Jadeja in the playing XI, the opening bowlers Deepak Chahar and Harbhajan Singh managed to keep MI under check in the first six overs.

Even though Quinton de Kock was off the block early with a six off Chahar, he was undone by a slower one and was caught by the make shift wicketkeeper Ambati Rayudu for 15 of nine balls. Harbhajan sent down a tidy two overs conceding just five runs while Chahar’s third was taken for two fours by Evin Lewis and one from Rohit. 16 runs came off it, but Harbhajan managed to finish off the powerplay with four-run over.Mumbai Indians reached 45/1 with Rohit on 17 off 14 balls and Lewis on 12 off 13 balls. (FOLLOW BLOG: CSK vs MI)

However, Rohit combined with Evin Lewis, playing his first game of IPL 2019 to add 75 runs for the second wicket in 57 balls to drive Mumbai. But CSK made a comeback with two quick wickets, when Mitchell Santner got rid of Lewis for 32 off 30 balls, caught at deep midwicket by Dwayne Bravo. Two runs later, Krunal Pandya fell to Imran Tahir attempting a wild hoick and was caught by Santner this time as MI went from 99/1 to 101/3. Rohit got to his first fifty off the season but failed to get going and departed in the 17th over caught at long-off by Murali Vijay, handinh Santner his second wicket.

And despite Hardik Pandya and Kieron Pollard, joining forces with 22 balls to go, the duo could only manage 33 runs off it with Chahar and Dwayne Bravo finishing well. Pandya did hit Bravo for a four and six in the final over. 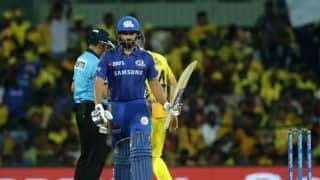 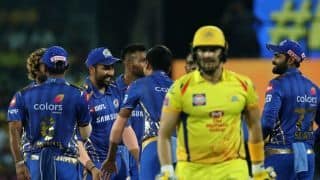