A superb return throw off his own bowling from Dwayne Bravo ended Virat Kohli's stay at the crease.

Kohli defended one straight back to the bowler but left the crease in the follow-through. Bravo was quick to grab the ball one-handed and throw it directly on the middle stump, while Kohli was nowhere in place. It was a splendid effort by Bravo, who himself could not believe it.

Soon after Kohli’s wicket, Dinesh Karthik followed him back in the hut as he was caught at deep square leg by Dwayne Smith off Ashish Nehra. This was after Virat Kohli and Dinesh Karthik put the Royal Challengers Bangalore (RCB) on top against the Chennai Super Kings (CSK) in their Indian Premier League (IPL) 2015 match at the MA Chidambaram Stadium in Chennai on Monday with their strong fourth-wicket stand.  Live Cricket Scorecard: Chennai Super Kings vs Royal Challengers Bangalore, Match 37 at Chennai

Chasing 149 to win, the Royal Challengers Bangalore (RCB) were 100 for five after 15 overs and needed another 49 runs to win from the remaining five overs, with five wickets in hand. Sarfaraz Khan and David Wiese were at the crease.

Kohli fell after scoring 48, having faced 44 balls and striking two boundaries and a six. On the other hand, and out of form Dinesh Karthik  provided him a strong support, as he scored 23 off 20 balls. Karthik hit four boundaries during his stay at the crease.

Earlier, Chennai Super Kings (CSK) won the toss and elected to bat, but they could manage only 148 for nine from their allotted 20 overs. Suresh Raina’s 25th IPL half-century was the only bright spot for them as they generally struggled with the bat. 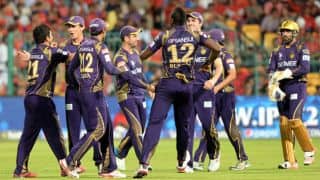 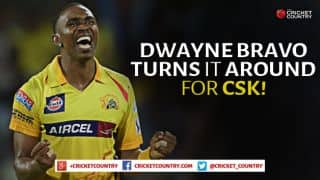