Royal Challengers Bangalore will face a formidable Chennai Super Kings side in the 16th match of the Indian Premier League (IPL) 2013 tournament on Saturday. 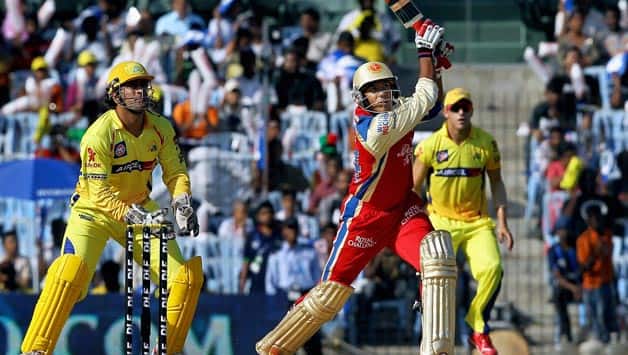 Royal Challengers Bangalore will face a formidable Chennai Super Kings side in the 16th match of the Indian Premier League (IPL) 2013 tournament on Saturday.

It would be a contest on even keel as both the teams are coming off big wins. While Chennai thrashed Kings XI Punjab by 10 wickets, RCB defeated defending champions Kolkata Knight Riders by eight wickets in their previous matches.

Although RCB and CSK seem evenly-matched on paper, the presence of Chris Gayle in the Bangalore team could prove to be the decisive factor.

Gayle yet again proved his mettle by striking an unbeaten 85 to ensure a convincing victory for RCB against KKR.

Such was the ferocity of the ‘Gayle storm’ that RCB knocked off the target with 15 balls to spare.

It was the third win for RCB in four matches. The imposing Jamaican, who has been in prolific touch, got his runs off only 50 deliveries hitting four boundaries and as many as nine sixes.

Chennai’s batting also has quite a few good-hitters with opener Michael Hussey shining in their previous match.

Also in good form is Murali Vijay, who got a fifty in the previous match. The two-time former champions have come back quite strongly after losing their opening match to Mumbai Indians.