11 deliveries is what Chennai Super Kings took to get off the mark, chasing 176 to win against Sunrisers Hyderabad at the MA Chidambaram Stadium, Chennai, but by the Powerplay overs they had made up for the slow start scoring 49/1. Shane Watson, after his inital struggles got going to score 20 off 17 balls, while Suresh Raina sped to an unbeaten 28 off 12 balls.

Affter Manish Pandey and David Warner’s fifties have pushed SRH to a formidable total at the Chepauk track, CSK would have hoped for a good start but which Bhuvneshwar Kumar and Khaleel Ahmed operating with the new ball, Shane Watson and Faf du Plessis were bogged down.

Kumar started well with a maiden to Watson while Khaleel Ahmed had his radar set early, maintaining the off and middle line over the wicket to bowl four straight dots to du Plessis. The pressure maintained by the two new ball bowlers was rewarded when du Plessis took off hitting the ball straight to Deepak Hooda at mid-on who hit the bullseye to send back the South African for one off seven balls.

Suresh Raina, at No.3, provided the much impetus to CSK innings with a four off his second ball towards mif-off boundary. Shakib Al Hasan was introduced in to the attack and Watson got going with a four muscling one past the bowler. Eight runs came off the over.

CSK got a move on with Watson helping himself to a six and a four in Khaleel’s Ahmed’s second over before Suresh Raina launched an all out assault on Sandeep Sharma, taking the Punjab pacer for four fours and a six in the sixth over, helping Chennai to 49/1. 22 runs came off the over. 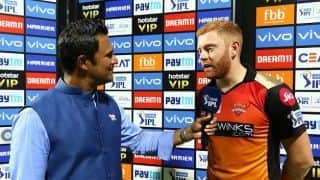 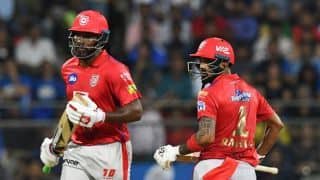 Amazing to have Chris Gayle and KL Rahul at the top of the order: Mayank Agarwal