Abbott's is the second hat-trick of the 2018 Championship. The first one was by Jordan Clark.

Dale Steyn has been far from impressive since his five-wicket haul against Yorkshire at Southampton in June. He had failed to impress across formats, and that includes the Test series in Sri Lanka, where he managed only two wickets from two Tests. At New Road, Worcester, however, he pushed Worcestershire to the back-foot with 3 for 25 and 2 for 33 in the match. As things currently stand, Hampshire need just two wickets to seal the match, while the hosts need another 128 all this, after Kyle Abbott did the hat-trick.

Worcestershire started their day on 68 for 4 after Hampshire had scored 191 on Tuesday. Steyn, who had got Tom Fell on Day One, now removed Brett D’Oliveira and Ed Barnard in the space of three balls with two beautifully pitched up deliveries that found the edges. Steyn’s fellow South African Wayne Parnell hit out, but with Fidel Edwards and Abbott a third South African supporting Steyn, Worcestershire were shot out for 120 in no time.

Hampshire, 71 ahead, soon became 25 for 4, but wicketkeeper Tom Alsop’s 64 saw them post a target of 248. Abbott took new ball, and had Daryl Mitchell caught at slip off the first ball. Then Steyn cleaned up Tom Fell and Alex Milton with familiar ease, and Worcestershire were left in shambles.

They limped to 72 for 5 before Abbott produced further drama: he had Joe Clarke edging one to Alsop, bowled Josh Tongue with a yorker, and had Barnard leg-before with an off-cutter. This was Barnard’s second duck of the day, one that gave Abbott a hat-trick. This was the hat-trick second in the 2018 Championship (Jordan Clark of Lancashire was the first, in the Roses match at Old Trafford).

Ross Whiteley and Parnell saw out the day as Worcestershire finished on 120 for 8, but 248 seems way beyond reach. 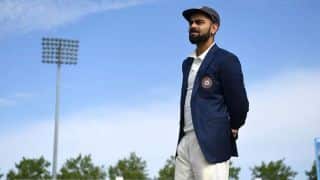