Dale Steyn has expressed that the first Test match against England is evenly poised at the moment.

Johannesburg: South African pace spearhead Dale Steyn has expressed that the first Test match against England is evenly poised at the moment after rain wasted a significant amount of time on the opening day at Kingsmead. Steyn, who made a stunning return to fitness by claiming three crucial wickets after a frustrating few weeks on the side-lines during India series, said that it was even-stevens at the moment and that they were lucky to get the breakthrough at the end, referring to James Taylor’s dismissal on 70. Describing the playing conditions as ‘tough’, the 32-year-old right-hander said that he was hoping to swing the ball with the warmer conditions and the drier outfield likely to stay on Sunday, Sport24 reported. Put in to bat first, England made 179-4 on the opening day with Nick Compton and Ben Stokes remaining unbeaten on 63 and five. LIVE CRICKET SCORECARD: South Africa vs England 2015-16, 1st Test at Durban

England middle-order batsman Nick Compton and James Taylor rescued and ensured England remianed on top at the end of Day 1′s play of the first of the four-match Test series against South Africa at the Kingsead Stadium in Durban on Saturday. Although it was a scary start to the day for England, following few fierce early breakthorughs by speargun Dale Steyn. However, both these batsmen made impressive comeback, thus putting up an impressive 100 plus run stand for the fourth wicket, as England came from behind to finish Day 1 on top and ensured that they must not lose further wickets to give the host any advantage. VIDEO: Dale Steyn speaks following Day 1 of 1st Test against England 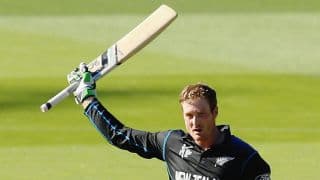