For the time being Muttiah Muralitharan still safely holds the record for the fastest time.

South Africa pace express Dale Steyn is nearing the 400 Test wickets landmark and would be the second South African to do so after Shaun Pollock if he achieves the feat.

However, he needs to claim 17 wickets in the imminent Test series against West Indies to reach the landmark soon.

If he manages it, he will become only the second South African to reach 400 Test wickets after Pollock, and also the 12th bowler in history to achieve the milestone, Sport24 reported.

Steyn currently sports 383 scalps at 22.56 after 75 Tests, and if he gets there in his next four Tests, including the trio against the Caribbean visitors starting at Centurion on Wednesday, he would be the second fastest ever to the landmark.

For the time being Muttiah Muralitharan still safely holds the record for the fastest time to reach 400 Test wickets as the Sri Lankan managed to reach the milestone in just his 72nd Test.

But next best is New Zealand‘s Sir Richard Hadlee, who hit the 400-mark in his 80th Test, so Steyn has a few games in hand to try to eclipse him to second spot for stealth to the figure, the report added. 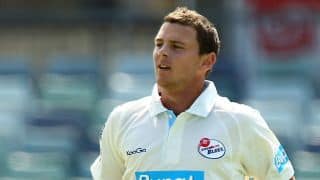 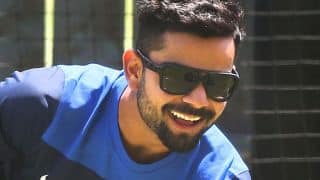 India vs Australia 2014-15: Virat Kohli is clown in Indian dressing room off camera