Steyn opted himself out of the three-match One-Day International series against Bangladesh.

Dale Steyn has now revealed the secret behind his new hair style. He Tweeted his inspirations for this new look and he is hoping it will work for him. Steyn is just four wickets away from 400 Test wickets. Recently the South African pace spearhead had to explain himself on Twitter, after making comments that infuriated the Bangladesh cricket fans. Steyn stated on Twitter, “I see some people have misunderstood what I said in a recent interview… Sorry if you feel offended, now go re-read and try understand. Peace”, Sport24 reported. READ: Why Dale Steyn will not waste few balls in a Bangladesh match

Guess I’ll be joining the club 2moro… If it works for them, sure hope it works for me! #itsmyrealhair pic.twitter.com/od5ixe8jn3

Earlier, Steyn opted himself out of the three-match One-Day International (ODI) series against Bangladesh as he wanted to be fully fit for the next World Cup. The world number one Test bowler said that at this stage of his career he wants to save his energy for major tournaments, rather than wasting his ‘last few balls’ in Bangladesh. Steyn’s comment led to an uproar among the Bangladeshi fans, who took social media to show their resentment. READ: Dale Steyn, Trent Boult vent anger on Twitter after being dropped by Sunrisers Hyderabad 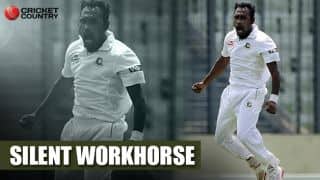 Mohammad Shahid puts in the yards, Bangladesh reap the benefits