The fourth Test will be played at Johannesburg, the same venue where Steyn injured his heal against India in February.

Dale Steyn s return to international cricket has now been postponed for another few weeks. As confirmed by Greame Smith, Steyn is eyeing a comeback in the fourth Test of the ongoing South Africa-Australia Test series. The fourth Test will be played at Johannesburg, the same venue where Steyn injured his heal against India in January .

In an interview to cricket.com.au, Smith said: I think Dale Steyn is still a little bit behind in his recovery. I spoke to him this morning actually. He says he s bowling well but it s taking him a bit of time to recover after spells so I think he s targeting that fourth Test to be available. ”

He also spoke about Morne Morkel’s inclusion in upcoming Test at Cape Town. He said: I think it would be a natural thing for Morne Morkel to come in. For him, close to 300 Test wickets, he s an experienced guy, (playing his) last series. You d want him make a big impact if he does get that opportunity.”

South Africa have a problem of few, after Kagiso Rabada was handed a two-Test suspension for breaching International Cricket Council (ICC) Code of Conduct for 2 Tests.

The third Test starts from March 26, with series tied at 1-1. 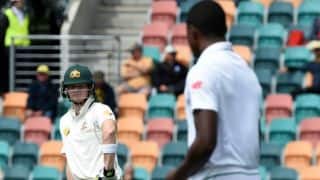