South Africa will play three ODIs and as many Twenty20 Internationals against Zimbabwe beginning this Sunday.

Veteran South Africa fast bowler Dale Steyn is all set to return to ODIs when the Proteas face Zimbabwe on Sunday at Kimberly and coach Ottis Gibson feels that his ace quick, who last played an ODI against Australia in October 2016, will be a great value addition to side and one that can also play the role of a mentor.

“With his experience, he’s a natural mentor anyway because that’s the kind of guy he is,” Gibson told ESPNCricinfo.

“He’s talking to the guys around the group, and to have his experience there, whether he plays or not, is great. There’s nothing to say he’ll play every game, but to have him in and around the dressing room and the nets passing on his experience can only be a good thing for the guys.

“Once Dale is fit, to me he’s still one of the best two bowlers in the country, other than KG (Kagiso Rabada). And he’s proven his fitness, so he comes back and we’ll see how he goes in the next couple of games.

“He’s someone who’s still clearly very passionate about playing for his country, and we’ll make an assessment on Dale in this series and the next against Australia, the next six games, and we’ll see how we go forward from there.”

With the arrival of Steyn, the South Africa think tank are left with a conundrum of where to fit Steyn in the two-pronged pace attack that contains Kagiso Rabada and Lungi Ngidi.

“Every person that gets an opportunity now will know that there will be less and less opportunities going forward, so you have to make every opportunity you get count at this stage,” Gibson said.

“I think by the time we get into the Pakistan and certainly the Sri Lanka series in the new year, that we’ll be looking to pick the team that we think is most likely to be the team that goes to the World Cup. So, this is an opportunity to look at one or two other players.” 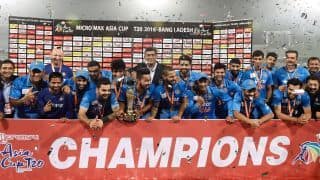