South Africa's Dale Steyn has said that winning the Cricket World Cup is his 'top priority'.

South African pace express Dale Steyn has said that winning the Cricket World Cup in Australia and New Zealand is his top priority.

Steyn said that South Africa is just trying to be a part of that puzzle, that when it’s finished, it has a ‘big W’ on it. He said that it is nice to have inspiring guys like A.B. de Villiers and Vernon Philander.

The pace bowler said that he does not want to be better than them, adding that he just wants to be able to participate in a winning side. He said that if he can win that World Cup without taking one wicket, he can still have a winner’s medal around his neck.

South Africa play three ODIs against New Zealand starting on October 21, then three T20s against Australia before a five-match ODI series against the Aussies in their lead-up to the international showpiece, which starts in February, the report added. 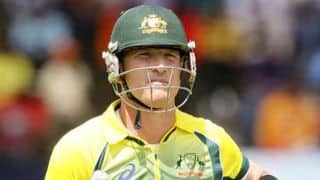