Christian feels he has what it takes to fit into Australia s limited-overs set-up.

Fresh from his all-round exploits in the Big Bash League final that helped Melbourne Renegades clinch their maiden BBL title, allrounder Daniel Christian feels he has what it takes to fit into Australia s limited-overs set-up. Christian last played for Australia during the India ODIs in 2017, while his previous ODI assignment dates further back to January 2014. With Australia lacking a genuine allrounder, and the improvements he’s brought about in his game, in-form Christian feels he is good enough to play LOIs for his country.

“I think I can, yeah,” Christian told cricket.com.au when asked if he’s capable of playing for Australia again. “I think I’m playing as good cricket if not better cricket than I have my entire career.

“The beauty of not playing four-day cricket for the last 12 months is being able to focus on my skills, particularly my batting and slogging at the end. I’ve been practicing slower balls and yorkers and things like that. I feel like I m on top of my game.”

Christian hasn’t played much for Australia since his debut in 2010. In 35 ODIs and T20Is combined, the allrounder has picked up 31 wickets and scored 300 runs for his nation including one five-wicket haul in ODIs. In Christian’ last series the T20Is in India, he played just one game and went wicketless. But while his opportunities may have been limited in LOIs, Christian has had reasonable success in T20 tournaments.

On Sunday, Christian lifted the Renegades from 65 for 5, to help finish on 146. He scored an unbeaten 38 and put on an unbeaten 80-run stand with Tom Cooper which gave the Renegades a match-winning total. Later, with the ball, he picked up 2 for 33, while the Melbourne Stars’ chase imploded as from 93/0, they lost their lasts even wickets for 19 runs as the Renegades won the match by 13 runs.

“That s an extraordinary game,” Christian said. “It hasn t quite sunk in yet. For us to pull that back and win by 20 or 15 or whatever was just extraordinary.

“At 0-93, looking over at their bench and knowing they still had (Glenn) Maxwell, (Peter) Handscomb, (Nic) Maddinson, Dwayne Bravo and these sort of blokes still to come, we were staring down the barrel. You take a couple of wickets and you never know. And sure enough, we just kept taking them. It was an extraordinary half an hour.”

But while the tile triumph is Renegades first, Christian was part of a BBL-winning franchise for the third time. He was part of South Australia s squad in 2011 and the Brisbane Heat in BBL02. But he ranks his recent glory with the Renegades at the top of the pile.

“Right up there at the moment. Particularly coming back like that,” he said. “The game was almost done For us to fight back like that and get over the line we still haven t played a perfect game of cricket yet all year.

“They got off to a flyer with the bat and we scrapped really well. It s a testament to the guys and the way they ve gone about it all year.” 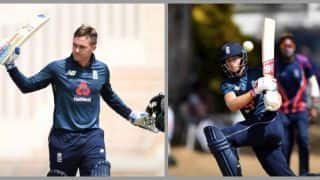