Left-arm spinner Daniel Vettori, who quit the New Zealand captainship after leading his side to the semi-finals in the ICC 2011 World Cup, says that he is enjoying time being part of the team. 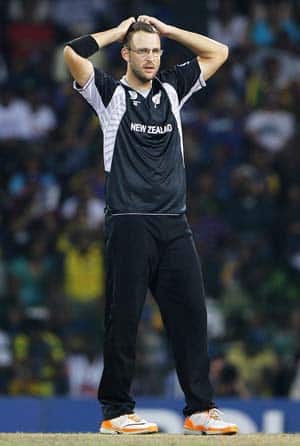 Left-arm spinner Daniel Vettori, who quit the New Zealand captainship after leading his side to the semi-finals in the ICC 2011 World Cup, says that he is enjoying time being part of the team.

“I really enjoyed it, actually,” Vettori said when asked about his first Test for the Kiwi side after quitting captainship.

As a captain, Vettori had to worry about declarations, bowling changes, field placements being the least and even about the players general level of fitness, but now, he doesn t need to worry about any of it and can concentrate on his individual game.

Vettori was quoted by New Zealand Herald, “Not being involved in all that, I thoroughly enjoyed it and it’s nice to just be with the family and have the phone off the hook a little bit more than normal. That’s continued on to playing and just being able to concentrate on my own game.”

“I still hope I’m helpful to Ross and some of the younger guys in the team and able to pass on some knowledge, but it’s not sitting up all night or during the day thinking about other players and what you need to do for them and how to improve the team,” he added.

The former Kiwi skipper said he wants to help Ross Taylor, the new captain, in every manner.

“I talked to him maybe two or three times [about tactics] during the Test match. I think Ross has a really good grasp of the game and also a good grasp of my bowling, which is the most integral part of my relationship with him on the field,” Vettori said.

“He did a lot of things I wouldn’t do and they worked out really well for the team [like bringing on Martin Guptill to dismiss Tino Mawoyo on the fifth day]. The reason we won that Test match was down to some of this moves. I can sit back and think it’s all in good hands and not worry about it at all. I was able to be just a player. I think I will play a lot longer than being a captain so it was pretty easy to sit back,” Vettori added.

Vettori, who has taken 353 wickets in Test cricket, would be aiming to surpass Sir Richard Hadlee s record of 431 scalps for the Black Caps, and having as many as 15 Tests lined up the next one-and-a-half year span, he has a good chance to come closer to the target.

Over the next 15 months, New Zealand will be touring Australia, West Indies, India, Sri Lanka and South Africa, and will be hosting Zimbabwe, South Africa and England.

Vettori, who quit the Twenty20 format few months ago to prolong his Test career, hopes to play in the 2015 World Cup being hosted by Australia and New Zealand.