For the first time were two hundreds scored in the same T20I. England chased down 179 the highest run-chase in women’s T20I history to defeat Australia in the third T20I of the series. Beth Mooney’s 117* had powered the hosts to a challenging 178 for 2 on Tuesday at Canberra. While the crowd might have thought that was the best of batting they had seen, Danielle Wyatt went on to hit the second century of the match (the first in Women s T20I while chasing), thus guiding her side to a 4-wicket victory with a over still remaining.

Opting to bat, Australia batted aggressively from the very beginning. They kept losing wickets at one end, but Mooney hit 19 fours and a six as she blasted her way to glory. She faced a mere 70 balls. Katherine Brunt and Sophie Ecclestone were the only successful English bowlers with a wicket apiece.

England were off to a poor start. Tammy Beaumont, Player of the Tournament in the World Cup earlier this year, was Jess Jonassen’s first prey, in the first over of the innings. Jonassen struck again off the first ball of her next over, getting rid of Sarah Taylor. Natalie Sciver went next courtesy a brilliant direct hit by Elyse Villani from mid-off.

England were 30 for 3 at this point. They needed another 149 in 90 balls with 7 wickets in hand. It seemed a lost cause.

Then skipper Heather Knight joined Wyatt. As Knight held one end, Wyatt exploded in an array of incredible strokes. The pair eventually added 139 in 75 balls, as good as sealing the match for England. Australia must take some blame for this: they dropped at least four catches, and Alyssa Healy was ordinary behind the stumps.

Wyatt scored as many fours as Mooney and one six more than her during her 57-ball 100. Knight added 51 before Healy ran her out.

The match seemed as good as over at this stage, with England needing a mere 9 from 15 balls. But Delissa Kimmince removed both Wyatt in the penultimate over. Brunt hit a four to help reduce the target before perishing against Kimmince.

With 2 to score from 7 balls, Fran Wilson’s scoop found its way to the rope over the Healy s head to take England to a 4-wicket win with 6 balls to spare.

While the hosts had won the ODI leg of the tour 2-1, England drew it with a 2-1 victory in the T20Is. With the Test also drawn, the teams finished level, on 8-8. This meant that Australia retained The Ashes. 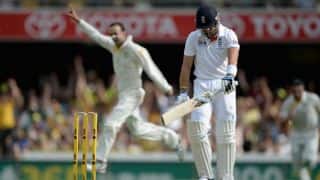