Darren Bravo and Kirk Edwards hit half-centuries to consolidate the West Indies' position on the third day of the second and final Test against Bangladesh on Monday. 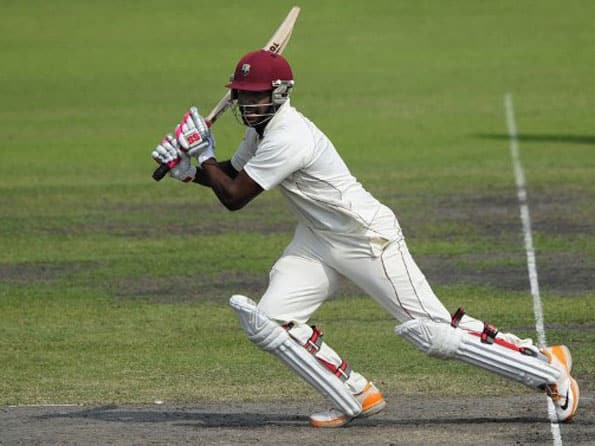 Darren Bravo and Kirk Edwards hit half-centuries to consolidate the West Indies’ position on the third day of the second and final Test against Bangladesh on Monday.

Bravo and Edwards each made 59 not out as the West Indies reached 133-2 in their second innings at tea for an overall lead of 257 runs with eight wickets in hand.

The pair have so far put on 100 for the unfinished third-wicket stand after openers Kraigg Brathwaite and Keiran Powell had fallen for 33 runs.

Bravo was more aggressive than his partner, once smashing off-spinner Nasir Hossain for two fours and a six in an over. He has so far hit two sixes and four boundaries in his 86-ball knock.

Edwards, who scored a hundred in the first innings, drove left-arm spinner Shakib Al Hasan through the covers to complete his half-century. He has so far cracked one six and five fours in his 126-ball knock.

Brathwaite, who made a half-century in the first innings, was run out for no score in the opening over after Naeem Islam hit the stumps at the non-striker’s end with a direct throw.

Shakib was the lone wicket-taker in the second session when he had Powell (12) caught by Nasir at mid-on.

Bangladesh were earlier bowled out for 231 in their first innings in reply to the West Indies’ 355.

The hosts added 27 runs to their overnight total of 204-7 before losing their remaining three wickets in 17 overs, with leg-spinner Devendra Bishoo taking two wickets and off-spinner Marlon Samuels one.

Bishoo was the first to strike when he had debutante Suhrawadi Shuvo (15) caught by Brathwaite at short-leg and then Samuels removed Nasir, caught at deep mid-wicket by Kirk Edwards while going for a big shot.

Nasir added eight runs to his overnight score of 34.

Bishoo ended the innings when he bowled Shahadat Hossain for four runs to finish with 3-62.

Fast bowler Fidel Edwards, who jolted Bangladesh with five quick wickets on Sunday, bowled just one over in the morning as the West Indies relied on their spin duo.

The opening Test ended in a draw in Chittagong. (AFP)

The Gilbert Jessop Mystery — Part 1 of 10