Darren Bravo put a poor Test series behind him by scoring an unbeaten century as West Indies warmed-up for their upcoming ODI seres against England with a 228-run thrashing of Middlesex at Lord's. 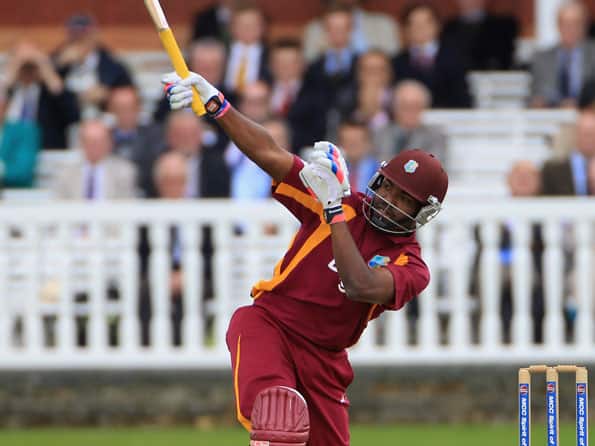 Darren Bravo put a poor Test series behind him by scoring an unbeaten century as West Indies warmed-up for their upcoming ODI seres against England with a 228-run thrashing of Middlesex at Lord’s.

Dwayne Smith weighed in with 96 and Dwayne Bravo a rapid 40 not out while dynamic opener Chris Gayle, in his first West Indies appearance in 15 months following a dispute with Caribbean cricket officials, looked in good touch while making 34 off 30 balls.

A weakened Middlesex side — they fielded only four regular first-team players — were left to chase a huge West Indies total of 335 for four off 50 overs and duly got nowhere near, collapsing to 107 all out with Gayle taking the last two wickets in the space of three balls with his off-spin.

Gayle, who last played for the West Indies in the World Cup quarter-final against Pakistan in Dhaka in March last year, had hit two sixes and four fours before he holed out to wide midwicket off Anthony Ireland.

But Smith then joined Darren Bravo, who averaged just 16 during England’s 2-0 win in a three-Test series concluded Monday, in a third wicket stand of 155 in 35 overs.

Smith hit two enormous sixes, one of which landed on the top tier of the pavilion, and 10 fours in his 96 off 81 ball but missed out on a century when he drove Tim Murtagh straight to mid-on.

Kieron Pollard was dropped twice before he was well held by Stirling at backward point off Josh Davey for 18 but Darren Bravo and half-brother Dwayne put on 73 in just six overs.

Darren finished on 112 not out at a run-a-ball off 112 balls with two sixes and seven fours while Dwayne made 40 off 21 balls.

Middlesex’s innings faltered from the starts as Andre Russell, another of the seven players drafted in for the one-day internationals, and Ravi Rampaul picked up two wickets and Dwayne Bravo one in the first 13 overs.

England and the West Indies play the first of three one-day internationals at Southampton on Saturday.(AFP)

We need to keep raising the bar, says Michael Clarke