South Africa won the toss and elected to field first against West Indies in Match 9 of Tri-Nation Series 2016 at Barbados.

Darren Bravo’s blistering 3rd ODI century helped West Indies post target of 285 against South Africa in Match 9 of Tri-Nation Series at Barbados. To what looked a game belonging to South Africa at one moment in the early overs, the tables were turned when Bravo and Kieron Pollard took the center stage with their 149-runs stand. After their wickets were fell, skipper Jason Holder and Carlos Brathwaite continued the show and put up 50-runs stand off 48 deliveries to keep the scoreboard ticking. It was not just a one-sided game, South African pacer Kasigo Rabada hailed in the entire innings with his figures of 3 for 31 at the end of his spell, also remaining the most economical amongst all the bowlers. Along with Rabada, Chris Morris also got his share of three wickets at the end of his spells along with a run out. LIVE CRICKET SCORECARD: West Indies vs South Africa, Match 9, Tri-Nations Series 2016 at Barbados

West Indies saw downfall as wickets kept tumbling in quick succession with South Africa’s pacer Kasigo Rabada on fire grabbing wickets of Johnson Charles, Marlon Samuels and Denesh Ramdin. He was almost on a hat-trick that did not go quite well for the Proteas pacer. After the fall of wickets, a lot depended on the middle-order for the Caribbean’s. Before Pollard and Bravo could begin with their innings, the rains did try to play spoilsport once again in 11th over, but the sun was back and the game was on cards indeed. Pollard and Bravo propelled West Indies to reach the 190 mark for their side. In the process, Bravo and Pollard achieved their fifties putting up a strong 100-run stand by 19.1 overs. When Pollard and Bravo were playing at their best, Wayne Parnell and Morne Morkel conceded way too many runs making it further difficult for the visitors.

Morkel who is playing his first real outing of the competition, got his first wicket in the tournament providing major breakthrough for South Africa by dismissing Pollard. He was picked for 62 off 71 deliveries with Faf du Plessis making no error at the boundary to grab hold of this crucial wicket. Skipper Holder entered to provide support to Bravo in the absence of Pollard. Bravo in no time achieved his ton with a stylish six off 100 deliveries. Soon, Chris Morris achieved his first wicket with du Plessis once again diving for it and Bravo making his way out for 102 off 103 deliveries. Morris achieved his second wicket in the form of skipper Holder who was picked for 40 off 46 deliveries. Sunil Narine played cameo after being dismissed for a run by Morris again.

Earlier, South Africa won the toss and elected to field first against West Indies. The Proteas did not make any changes to their side as to that against Australia which was washed out due to rains. West Indies also maintained the same side as to the one played against Australia. Skipper Jason Holder, who left the field on Tuesday with a hamstring strain after bowling just two overs, passed a fitness test an hour before the start of play to take his place at the helm of a team seeking to repeat its tournament-opening victory against the Proteas. 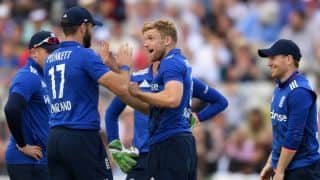