The coach said he has fallen in love with his current role after achieving a "bit of success" so far.

Melbourne: Australia‘s World Cup-winning coach Darren Lehmann has hinted that he may not continue at the helm of affairs for an extended period, saying his role has a shelf life due to hectic international schedule and players’ need also change. Lehmann said he has the “best job in the world” but he would not be in this role forever. He took charge in 2013 and his contract runs till 2017. READ: Australia needs to be at its best for Ashes 2015, feels Steven Smith

“If you have a young family it’s tough — they’re at school and all those sort of things. But it’s the best job in the world. You’d love to be able to do it for 20-30 years,” Lehmann, who has also guided the Australian team to Ashes victory in 2013-14, said.

“But I don’t think you can. I think players need change occasionally. I won’t be doing it forever, and hopefully I get to exit in my own way,” he added. READ: Ryan Harris looking forward to playing in Ashes 2015

In the next two years leading up to the Champions Trophy in 2017, Australia travel to the West Indies, England, Bangladesh, New Zealand, South Africa, India and Sri Lanka, along with two jam-packed home summers, leaving roughly two months of free time for those players not involved in the lucrative Indian Premier League.

Lehmann, his support staff and the players who represent the country in Test, ODIs and T20 cricket spend on an average 300 days on the road each calendar year. The coach said he has fallen in love with his current role after achieving a “bit of success” so far. READ: Australia consolidate number one position in ICC ODI rankings

“I’m enjoying this role. It’s a role I did not set out to do when I started coaching but I’ve fallen in love with the role and I’ve been lucky enough to have a bit of success. You are only as good as your players. The players have been brilliant and bought in to what we’re trying to do. They should get all the credit,” Lehmann, who has played 27 Tests between 1998 and 2004, said.

“They’ve been exceptional over a tough period of time in the past few years. For them, they help you look maybe a little better than you are. I’m pretty pleased for them. From my point of view, it’s a case of taking each series as it comes and see what happens,” 45-year-old Lehmann was quoted as saying by cricket.com.au.

“That means we’re playing pretty well and going OK. If you lose a few in a row you never know, you’re under pressure again. But that’s just the way it is.”

Lehmann has had a golden run since taking over the reins from former coach Mickey Arthur on the eve of the 2013 Ashes, reclaiming the urn six months later in emphatic fashion and guiding his charges to World Cup glory in March this year. He signed a one-year contract extension in October last year to see him in the top job until June 2017, taking him through to the 50-over Champions Trophy in England.

Upon taking the role almost two years ago, Lehmann was advised against sharing the job with his coaching peers. But the former left-handed batsman likes the idea of letting another coach step in to gain experience, just as NSW coach Trevor Bayliss did for the T20 international series against South Africa last November, aided by assistant coach Brad Hodge.

“I had some good mentoring conversations with different international coaches and they’re of the opinion splitting the role is not the way to go as a head coach,” he said.

“Splitting the role (with specific) assistants and (into) disciplines is a bit easier to (provide) longevity for them (support staff). As a head coach you need to really drive what you want to do. You’re captain’s big driver in that as well. What you can do is when you have the end of a long tour take a break and let someone else take over a tour for a short amount of time,” he said. 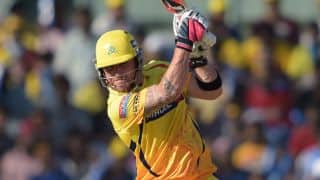