Not resting on the laurels, Australian coach Darren Lehman believes his side can drastically improve on performances, despite being No. 1 in Tests.

Darren Lehmann says even though Australia have reached the top of the ICC Rankings for Teams in Test cricket, his side has a lot left to achieve. Australia became world No. 1 after their away series win in New Zealand by a margin of 2-0 last month, and they are likely to stay at the top with lot of T20 cricket lined up in the next few months. Lehmann wants Australia to keep improving, as he believes Australia have selected the bunch of players who will take their team forward after as many as six retirements from the Test side last year, following the horrendous tour of England last year for Ashes 2015. ALSO READ: South Africa vs Australia 2015-16, 3rd T20I at Cape Town: Preview

Lehmann told ESPNCricinfo, “We were lucky enough to pick a good group that can take us forward. Yes we’re No.1, but we’re a long way away from where we want to get to. We’ve got the challenge of playing well in Sri Lanka in four months’ time. That’s a great challenge for the group. If we win that series, that’s adaptability. That’s becoming better.”

Lehmann has been one of Australia’s selectors and he admitted that they have done well in hindsight, and their gamble on a few players has produced positive results. He said, “You wouldn’t think you’d lose that many [players], but that happens and you’ve got to adapt. “I’m really pleased that we took a punt on some players and they’ve done really well. [National selector] Rod Marsh has been excellent. We cop a lot of criticism as selectors — that’s part and parcel of the game and you accept that from the media and the fans — but sometimes you get it right.”

Australia had one of their lowest moments in Test history when they were shot out for 60 at Trent Bridge, and despite the horror that their batsmen went through, Lehmann says he does not want to read too much into it.  “I’m not that worried about the 60 all out. The conditions were overcast, green wicket, perfect conditions to bowl. I think if we bowl first we bowl them out — maybe not for 60. But I don’t think that 60 all-out was a line-in-the-sand moment. I think more so [the disappointment was] the fact that we’d lost the Ashes. ALSO READ: South Africa vs Australia 2015-16, 3rd T20I at Cape Town: Likely XI for the Hosts

He continued, “And I was probably more disappointed with our first innings at Cardiff. From Warner who got 17 to Rogers’ 95, the top seven all got starts and no one went on. Whereas now we’re making 500 because blokes are going on with it. It’s a tough one. I don’t look at the 60 as bad as the 308. If we play well and get 500 in that game, maybe it’s 2-1 going into the last Test.”

Talking about the leadership pair of Steven Smith and David Warner, Lehmann said, “He’s [Steven Smith]  been brilliant in the role. They complement each other really well. David does everything a vice-captain should do behind the scenes, and lets the captain concentrate on the bigger issues. That’s important for us.

Lehmann added, “They’ve done a really good job transitioning from Clarke and Haddin to Smith and Warner. It’s been exceptional, a really smooth change. That probably helps when you’ve got the age of the players coming down a little bit. But the way they’ve handled it — I can’t speak highly enough of both of them. I think we’ve developed nicely, and quicker than we probably expected. But that can change quite quickly as well. We’re going to have some ups and downs — we know that. So we’ve got to lessen the downs and make sure we’re better prepared than we ever have been each and every day.”

Australia will be hosting South Africa and Pakistan next year, and will be touring the Asian teams Sri Lanka and India. Lehmann says these four series will be a good assessment of the current world No. 1 side.  “We’ve got two subcontinent tours and two tough Test series at home. Come this time next year, we’ll have a better idea of where we sit. South Africa have been very good for a long period of time away from home. They’ve still got some quality players. I suppose the big one is winning away in the subcontinent. That’s the big challenge. We’ve got to do that in Sri Lanka first, then play well against quality sides at home, and then play well in India. The next four series are pretty big.” 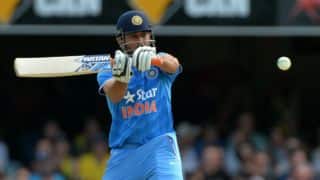