However, Darren Sammy said that Chris Gayle was a massive figure for the West Indies not only on the cricket field but off the field as well, Sport24 reported.

Johannesburg, Mar 08 (ANI): West Indies skipper Darren Sammy has described controversial star batsman Chris Gayle as the ‘most destructive’ Twenty20 batsman, insisting that his side have players to reclaim the World Twenty20 title, which they won four years ago. Gayle came under severe criticism after trying to flirt with an Australian TV presenter live on air in January during the Big Bash League. Also, the left-handed explosive batsman is often questioned for choosing lucrative T20 tournaments over national duty. However, Sammy said that Gayle was a massive figure for the West Indies not only on the cricket field but off the field as well, Sport24 reported. ALSO READ: ICC World T20 2016: Chris Gayle, Dwayne Bravo, Sunil Narine in West Indies squad

West Indies cricket had been mired in a pay dispute with their cricket board last month. Although the row has since been resolved, relations between players and board remain strained. In addition, West Indies suffered a double blow when all-rounder Kieron Pollard and off-spinner Sunil Narine both withdrew from the initial World T20 squad.

Sammy admitted that it was always difficult to replace players like Narine but insisted that West Indies have players who can ‘get the job done’ for them. West Indies will play warm-up games against India on Thursday and Australia on March 13, before heading to Mumbai to begin their Super 10 campaign against England on March 16.

Earlier, Sammy is backing his team to keep their T20 number one ranking and also win this year s World Twenty20 tournament. The 32-year-old was on Friday named the West Indies captain for the tournament to be played in India from March 8 to April 3, reports CMC. Sammy has made 60 appearances in T20 Internationals for the regional side. He previously led the West Indies in Tests and One-Day Internationals, including the 2011 One-Day Cricket World Cup. This is the third time he will captain the team to the World T20 Tournament. He was at the helm when the Windies beat Sri Lanka at the R. Premadasa Stadium to win the Championship in 2012 and returned as skipper in 2014 when they reached the semi-finals in Bangladesh. 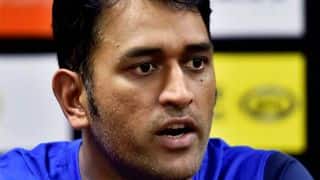