West Indies‘ Twenty20 captain Darren Sammy says his decision to quit Test cricket came after the selectors conveyed to him that they didn’t have any plans for him as player or captain in the team.

Sammy retired from Tests Friday evening and the announcement came just hours after the West Indies Cricket Board (WICB) appointed wicketkeeper Denesh Ramdin as captain of the Test side for the upcoming three-Test home series against New Zealand beginning June 8.

“It was told to me that the selectors had no plans for me in Tests. They are moving in a new direction and I was no longer needed as captain or player,” Sammy told IANS over phone in the wake of his announcing his retirement from Tests.

“Cricket is not about Darren Sammy — they put me in the position and they have every right to take it away. I have no ill-feelings towards anyone.”

Sammy, though, will continue to be the captain in the shortest format of the game, which means the West Indies will have separate captains for all three formats. Ramdin takes over in the Tests while all-rounder Dwayne Bravo replaced Sammy in the One-Day Internationals (ODIs) last year.

“I am proud of my contributions to West Indies cricket. I have always given it my all. I’m still the T20 captain and a member of the ODI side, I will continue to perform to the best of my abilities in these two formats,” Sammy said. Sammy was the first player from St. Lucia to play for the West Indies Test side, making his debut as a 23-year-old in 2007 against England at Old Trafford. He took seven wickets in the second innings and announced his arrival to the world.

Sammy had played just eight Tests when he took over the captaincy at a tumultuous time for West Indian cricket. In October 2010, explosive opener Chris Gayle was the captain of the regional side but turned down a WICB central contract and talk of dissatisfaction among the players surfaced.  Sammy said the most challenging part of being captain was to rally all the players under the West Indian flag.

“It was the most challenging situation I have faced in my career. To handle a lot of different people coming into the team is difficult. West Indies is a group of islands, so every island has its own culture and identity. Rallying the players was the most difficult task for me but I took it on bravely. I have enjoyed every single moment but I will admit that it has been tough,” said Sammy.

Under Sammy, the West Indies played 30 Tests, won eight, lost 12 and drew 10. The 0-2 series loss to New Zealand in December last year made it four heavy Test losses in five matches and was the last straw for the St. Lucian in the Test arena.

Sammy wished his successor well and said Ramdin’s stint as the vice-captain would help him do a good job. Ramdin, who has played 56 Tests, 109 ODIs and 46 T20s, led the national side in three T20s and an ODI. With him at the helm, Trinidad and Tobago have won 21 out of the 37 matches played, including a semifinal finish at the Regional Four-Day competition this season. “I wish Denesh Ramdin all the best. He has a good cricketing brain and has a lot of experience at captaining sides. Hope the players get behind him,” said Sammy. 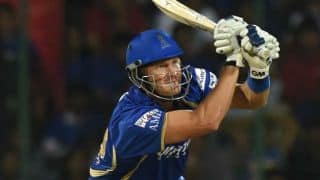