Unfortunately for the current generation of Caribbean cricketers living up to the standards set by the greats of yesteryear had proved a tough task. 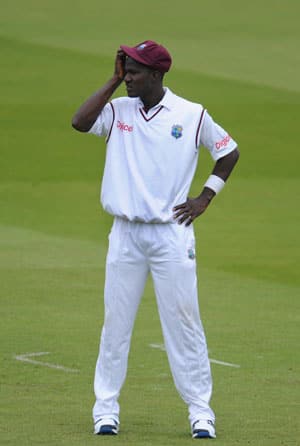 The West Indies have long been the rest of the world’s ‘second favourite’ cricket team.

Whether it was the 1950s line-up featuring the ‘3Ws’ (Everton Weekes, Frank Worrell and Clyde Walcott), the Garfield Sobers-inspired side of the 1960s or Clive Lloyd’s world beaters of the 1970s and 1980s, cricket lovers have long admired the West Indies’ exuberant play.

Now all they want them to do is recapture some of those glory days.

Certainly, if it was a matter of global sentiment it would be West Indies not England who were the world’s number one ranked Test side.

Unfortunately for the current generation of Caribbean cricketers living up to the standards set by the greats of yesteryear had proved a tough task.

There was plenty of grit, if not much in the way of batting flair, on show during the first Test against England here at Lord’s but that couldn’t prevent the West Indies going down to a five-wicket defeat on Monday’s final day.

But the determination of Shivnarine Chanderpaul, the world’s number one batsman who occupied the crease for over 10 hours in total for scores of 87 not out and 91, as well as the promise of fast bowlers Kemar Roach and debutant Shannon Gabriel, hinted at better days ahead.

A series of disputes involving the West Indies Cricket Board have left the squad without several senior players, notably former captain and opening batsman Chris Gayle, while the fact the lucrative Indian Premier League cuts across the West Indies’ domestic season has not helped their prospects.

It’s all left fans elsewhere feeling rather protective of a West Indies who’ve now lost five of their last seven Tests and drawn the other two.

Now West Indies captain Darren Sammy is keen to reward the well-wishers with wins rather than laudable losses.

“Wherever we travel around the world, the (home) fans would always say when we speak to them they support Australia and then West Indies, the English they support England and then the West Indies,” Sammy said. “In India it’s the same.

“Fans want to see West Indies back on top because the flair we bring to cricket, the excitement it’s all fun to watch.

“We as a team know that and we are doing everything we can to get better and we are going to continue to try hard.

At 10 for two and 57 for four chasing 191 to win, England were rocking and home captain Andrew Strauss said of the West Indies: “You only have to see the way they ran Australia very close to know they are a very competitive side.

“We were under no illusions about that.”

Meanwhile the fact the West Indies defied many pre-match predictions to take the game into the fifth day gave Sammy grounds for guarded optimism ahead of the second match of this three-Test series starting at Trent Bridge on Friday.

“We are quite pleased,” said the all-rounder. “We were told no fifth-day tickets were printed, but we showed a never-say-die attitude and produced some good performances.

“No one gave us a chance, and we kept coming back.

“But we’ve got to be at our best all the time against the number one team.”(AFP)