West Indies produced an inspired batting performance to beat India by two wickets in their second One-Day International (ODI) match at Visakhapatnam on Sunday. With this win, the tourists levelled the three-match ODI series as they bounced back in an impressive manner after six-wicket loss in the first ODI. 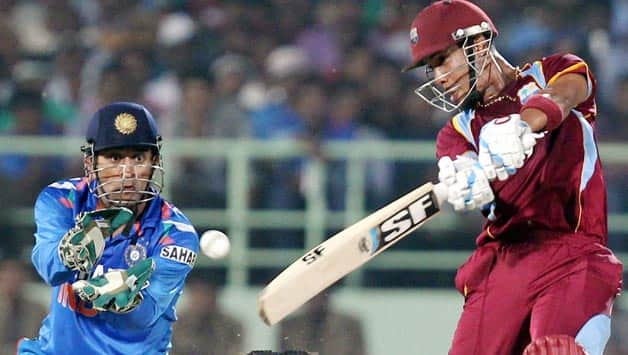 West Indies produced an inspired batting performance to beat India by two wickets in their second One-Day International (ODI) match at Visakhapatnam on Sunday. With this win, the tourists levelled the three-match ODI series as they bounced back in an impressive manner after six-wicket loss in the first ODI.

Chasing a daunting target of 289, the West Indies scored 289 for eight from 49.3 overs to register their first win on this tour.

As many as four West Indies’ batsmen — Kieran Powell, Darren Bravo, Lendl Simmons and Darren Sammy hit half-centuries as the tourists won the game but not before few hiccups.

The West Indies made a shaky start in their chase of 289, losing their opening batsman Johnson Charles early in the third over. India seamer Bhuvneshwar Kumar took a sharp return catch — in the process hurting himself as the ball hit him in stomach.

The tourists slipped further when their batting mainstay Marlon Samuels also fell early. After Mohit Sharma was thrashed for two boundaries in the sixth over of their chase, Indian captain and wicketkeeper MS Dhoni made a good tactical move to stand close to the wickets. The move worked for India as Samuels nicked the fourth ball and the West Indies were reduced to 23 for two.

Powell began the partnership with three boundaries off Bhuvneshwar in the seventh over, and his partner followed him with three consecutive fours off Mohit in the 10th over to help their side achieve some momentum.

As the pressure lessened on the West Indies, Darren Bravo and Powell began taking singles and picking boundaries on loose balls. They stitched a strong 100-run partnership which not only bailed the West Indies out of trouble, but also put them in a strong position from where they could comfortably achieve the target.

Darren Bravo had luck on his side — the Indians missed as many as three chances in four deliveries to dismiss the southpaw. Dhoni, in the 20th over of Ashwin spilled a simple chance, and one delivery later, Suresh Raina failed to grab a tough catch at the slip. On the first delivery of the next over, Mohammed Shami stretched his hand but could not grab the ball off his own bowling.

The left-handed Bravo looked comfortable at the crease as he swatted eight boundaries. But the good luck was over finally when Dhoni took a sharp catch in the 23rd over of Ashwin. West Indies were 123 for three.
Darren Bravo’s dismissal brought Lendl Simmons at the crease, but his partnership with Powell did not last long as Ashwin got the latter stumped in the 27th over to leave the Caribbean side in trouble.

Dwayne Bravo fell soon — a short of a length delivery by Bhuvneshwar was hit in the air by the West Indian captain was caught by Shikhar Dhawan at deep midwicket. The West Indies were 188 for five after 35 overs.
Simmons by then had raced to 33 not out, hitting four boundaries. Darren Sammy was at the crease with him and this was when the Indians started tightening the noose. The boundaries dried up as they took the mandatory powerplay, as only 15 runs came off five overs.

Simmons too was provided a lifeline. In the 42nd over, Yuvraj Singh spilled a catch at the long-on position as the batsman went for a big heave off Bhuvneshwar. Sammy was quick to rub some salt in India’s injury a six on the last ball of the over. Simmons got the same result on the first ball of the next over off Ravindra Jadeja, and the West Indies were well on top.

Sammy played a fine knock, putting away bad balls over the ropes for couple of sixes and rotated the strike well to take West Indies close to the target. While Simmons looked a little unsettled at the crease with the required run-rate going up, Sammy kept cool and kept West Indies on the track.

Simmons was nervous, and Jadeja had him trapped in front of the wicket on the final ball of the 47th over. He scored a fluent 62 off 74 balls, hitting one six and five boundaries. Simmons and Sammy added a crucial 82 runs for the sixth wicket, which helped the West Indies win the game.

In the next over, Sammy took a single off the first ball to complete his sixth ODI half-century, which came from 40 balls, studded with three sixes and as many boundaries. On the next ball, Dhoni spilled another catch as the new batsman Jason Holder had nicked the ball, which ricocheted off the Indian captain’s gloves.

The West Indies slipped up a bit towards the end, with Holder and Sunil Narine falling in quick succession, but Sammy ensured that his side emerges victorious.

Sammy remained unbeaten on 63 off just 45 balls, hitting four boundaries and as many sixes.

For India, Ashwin, Bhuvneshwar and Shami claimed two wickets each.

Man of the Match: Darren Sammy