West Indies T20 captain Darren Sammy is to make his debut in Australia’s Big Bash League (BBL) this summer after signing with the Hobart Hurricanes.

“With players like George Bailey, Alex Hales and Ben Dunk, there is a lot of exciting talent in the team already,” CMC quoted Sammy as saying.

Sammy is expected to represent Hobart in the first six matches of the tournament before joining West Indies for their training camp ahead of the 2015 World Cup.

The St. Lucian all-rounder is joining England’s Hales as the two international signings for the Hurricanes.

“I have heard so much about coach [Damien] Wright, he seems like a West Indian, very cool and an amazing fellow,” said Sammy who was captain of West Indies in all formats until last year, when Dwayne Bravo was handed control of the One-Day International (ODI) side, and Denesh Ramdin became Test captain earlier this year.

“A few of my [West Indian] team-mates might also be playing in the Big Bash League so I’m looking forward to the contest with them.”

Sammy’s lower-order striking has made him a dangerous batsman in the shorter formats and he has taken 99 T20 wickets at 25.18 with an economy rate of 7.37.

“He’s a really talented cricketer who can do a little bit of everything,” Wright said.

“He’s a great leader as well and he’s been captain of the West Indies for a number of years now also captaining the team for the T20 World Cup in 2012. Sammy will give us that lower-order hitting too which is something we didn’t quite have last season.” 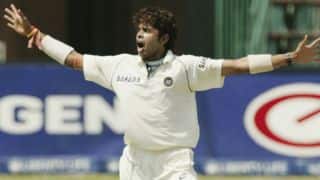