Gower, 62, has been part of Sky’s commentary team for 20 years. During this time, his expertise in calling games of cricket across the globe has been well-appreciated and his rapport with fellow former England skippers Nasser Hussain, Mike Atherton and Ian Botham, as well as David Lloyd, particularly memorable.

Speaking to Sportsmail, he said that the end of his contract with Sky had come suddenly and that he was saddened by the broadcaster’s decision.

“I am and I have to pick a word carefully unhappy that it’s ending,” said Gower. “However people try to explain the reasons, the times they are a changin’. I actually do love the job. Some people suggest I don’t or maybe I have moments off. We all have days off. But I do love being around it. It’s my environment and I feel comfortable there. If there’s a way of staying in it, that would be wonderful.”

Since he retired from cricket after 14 years as an England player – including 32 Tests as skipper – Gower has worked with the BBC’s Test Match Special, Channel 9 in Australia and Sky. He joined Sky in 1999 on a full-time contract.

He said that the end of his association with Sky came about as the channel started to ponder a new direction.

“The gist of it is they want to move on and change style,” said Gower. “It’s that dreaded start to a sentence: ‘We think you’re doing a great job, but ‘ That, of course, leads to where we are now. I’m aware that our demographic for Sky cricket is kind of my demographic. Their research proves that. The main part of our watching public for Test matches is of a certain age and probably white males. So it’s a shame I can’t keep appealing to them and keep them happy.”

Elegance personified when batting at the crease, Gower was England’s twinkle-toed, blue-eyed boy wonder who ended his Test career with 8231 runs at an average of 44.25.

The final Ashes Test at The Oval from September 12 will be Gower’s last as a commentator for Sky Sports. “I have no intention of retiring to a hilltop in Peru yet,” he said. 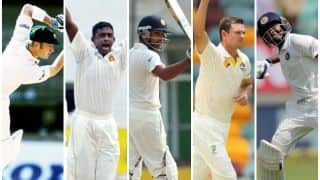