“The way he prepares for every game, the way he looks after himself, he’s the ultimate professional,” Saker said of Jordan.

Saker, himself a former Victoria and Tasmania seam bowler, added Jordan’s attitude was equalled only by his talent.

“He always wants to get better and he is getting better every game,” the 47-year-old bowling guru insisted.

“He fields really well. He bowls well and when he gets the ball in his area he hits it out of the park so he’s been a fantastic find for us,” Saker added of the Barbados-born Jordan, who came to England after being scouted for a sports scholarship at London school Dulwich College by former Test batsman Bill Athey.

Sri Lanka’s total was the lowest score made by any Test nation against England in a one-day international and second only to minnows Canada’s 45, also at Old Trafford, during the 1979 World Cup.

Bowling at a lively pace, Jordan made sure there was no way back for Sri Lanka, sent into bat in overcast conditions by England captain Alastair Cook, after James Anderson had starred on his Lancashire home ground with a spell of two wickets for no runs in five balls to remove both openers.

Cook and Ian Bell made light work of scoring the winning runs, Bell finishing a match that lasted just 36.1 overs out of a possible 100 with a straight six off spinner Rangana Herath as England went 2-1 up in this five-match series.

But there was no doubting the star of the show, with Jordan collecting his second man-of-the-match award in three games after taking three for 25 in England’s series-opening 81 run-win at The Oval last week.

Even more impressive was the fact that this dominant display, only their fifth 10-wicket win at this level, came just three days after England had been skittled out for 99 during Sri Lanka’s 157-run victory in the second ODI at Chester-le-Street.

Jordan has little time for ‘sledging’ opponents, preferring to let his cricket do the talking.

“I try to leave as much as I can on the field, if not everything,” the 25-year-old Jordan said after what was only his 11th one-day international.

“I’ve always been quite an aggressive performer.”

It appeared Sri Lanka had tried to unsettle Jordan verbally at Chester-le-Street, but to little effect.

“That kind of stuff doesn’t faze me,” he said. “If anything, it gets me going a little bit more.”

Cook, who missed the Chester-le-Street collapse with a groin strain, said Jordan’s competitive spirit could take him a long way in the game.

“It’s a great attribute to have.”

Meanwhile Sri Lanka captain Angelo Mathews was left hoping his side could follow England’s example in bouncing back from a heavy defeat come Saturday’s fourth ODI at Lord’s.

“We are in the same situation,” he said. “It’s one of the worst games I’ve ever played, ever been a part of.

“Poor shot selection was the main reason we got so few runs. But it was never a 67 wicket — there were no demons in it.” 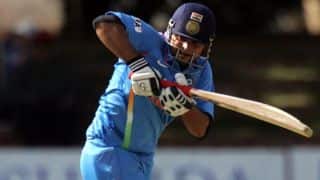 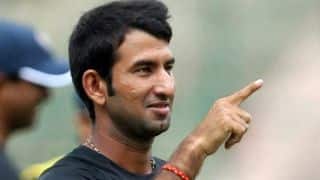