David Warner is also the fourth Australian to achieve this feat.

David Warner becomes only the fifth batsman overall and fourth Australian to score a hundred before lunch on Day One of the first Test. He achieved this feat during the third Test between Australia and Pakistan at the Sydney Cricket Ground (SCG). Warner joins the elite list of Victor Trumper, Don Bradman, Charles Macartney and Majid Khan. Majid was the last batsman to score a ton before lunch on Day One of a Test. This the first time something like this has happened on Australian soil. While Trumper, Macartney and Bradman created this record in England, Majid the last batsman to do so scored his ton in Pakistan in 1976.

When Bradman scored a hundred before lunch, he remained unbeaten on 105 and went on to score 334 against England. Trumper, Macartney and Majid finished with scores of 104, 151 and 112 respectively. Warner s opening partner Matt Renshaw on the other hand managed to score just 25 from his 84 deliveries. Warner in this game raced to a fifty off just 42 balls and needed just 38 more deliveries to score his next fifty runs. This was Warner s 18th ton in Tests and has also struck 22 half-centuries. He also made 144 in the previous Test at Melbourne.

Below is the list of batsmen, who have scored a hundred before lunch on Day 1 of a Test:

Earlier, Steven Smith had won the toss and elected to bat first. Australia have made a couple of changes to their side. They have handed a debut to all-rounder Hilton Cartwright and have also replaced Jackson Bird with left-arm orthodox spinner Steve O Keefe. Pakistan too have a debutant. Sharjeel Khan makes it to the Test team. Pakistan have also roped in fast bowler Imran Khan in place of Sohail Khan. 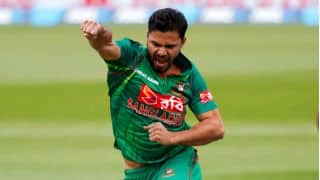