Earlier India began Day Four on 369 for five with Rohit Sharma and Wriddhiman Saha in the middle.

David Warner, the Australian batsman becomes 2nd Australian after Don Bradman to score hundreds in each innings against India. Bradman did it way back in 1948. He scored 132 and 127 not out  at Melbourne. After 66 years Warner became joined him in the record books with a score of 145 in the first innings and 100 not out so far in the second innings of the first Test at Adelaide. Thanks to his powerpacked performances, Australia are dominating the Test.

Earlier India began Day Four on 369 for five with Rohit Sharma and Wriddhiman Saha in the middle. Soon after they were all out for 444, handing a crucial 73 run lead to Australia. When the hosts came out to bat in their second innings, Warner started from where he left in in the first innings. He was lucky to survive as he was bowled by Varun Aaron on a no ball. At that time Warner was on 67. Again when Warner was on 89, Murali Vijay dropped him. 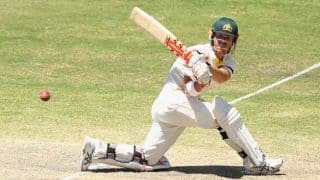