Pacers are bowling a lot of no-balls in cricket nowadays.

Australia’s left-hand opening batsman David Warner feels that third umpires should be consulted regarding no-ball issues. Warner who is also Australia’s vice-captain said that the ground umpires should be given an extra advantage and help from technology to avoid no-ball errors. It needs to be mentioned here that no-balls are increasingly becoming a norm in international cricket. When Australia defeated Ireland Joe Burns was called back after replays revealed that Irish fast bowler Craig Young had bowled a no-ball (overstepping a mark). This trend was also witnessed in Ashes 2015. In the Oval Test on day two, Steven Smith and Mark Wood were given lives. This was after the third umpire intervened and found bowlers Steve Finn and Mitch Marsh to have overstepped. READ: Dimuth Karunaratne caught off no ball from Wahab Riaz against Pakistan on Day 2 of 1st Test at Galle

In a conversation with cricket.com.au Warner said, “I think if the umpires start calling them a bit more [it will help]. Through the Test series I think there was probably 30 or 40 no balls missed. There obviously has to be something there because if the bowlers are consistently bowling no balls they might not be getting enough feedback. The umpires do give them feedback, you do hear them say ‘you’re a bit tight, you’re tight’ but I feel that the game at the moment, the umpires should definitely keep track of what’s happening in front of them.” Warner feels that fast bowlers should be more conscious on not bowling no-balls. ALSO READ: England vs Australia 2015: David Warner claims to follow no-drinking policy

“I think with today’s camera-work … the third umpire, even if it’s a late call, they can say whether that was a no ball. I’m not saying that the umpires are in the wrong – the bowlers shouldn’t be bowling no balls at the end of the day. During Test matches it’s very difficult because that line [the crease] is worn away during the session. So it’s quite tough for the umpires to look down and at 150 kmph you’ve got 0.4 of a second to react as a batter (so) it’s quite hard for an umpire to look down and look up (in time) as well. At the end of the day we’ve all got a tough job,” Warner signed off. 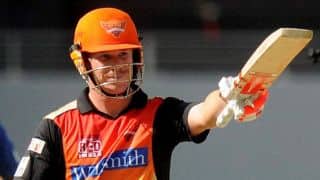