Opener David Warner brutalised India with a hurricane century as Australia took a giant step towards clinching the series on the first day itself after skittling out the visitors for a paltry 161 in the third cricket Test at WACA. 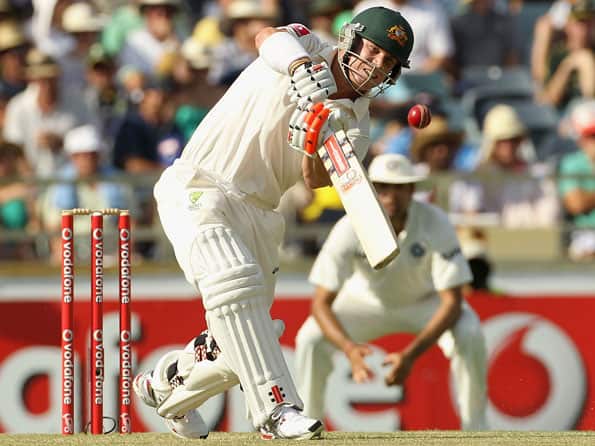 Opener David Warner brutalised India with a hurricane century as Australia took a giant step towards clinching the series on the first day itself after skittling out the visitors for a paltry 161 in the third cricket Test at WACA.

Warner pulverised the Indian bowlers sending them on a leatherhunt as Australia smashed their way to 149 for no loss with only 12 short of surpassing India’s modest first innings score. At stumps, Warner was batting on 104 while Ed Cowan played the role of sheet anchor to perfection batting on 40.

Warner who gave an exhibition of how to play horizontal bat shots on a bouncy strip to score the fourth fastest century in the history of the game off just 69 balls. He reached the landmark with a huge six over long on off Vinay Kumar’s bowling.

Warner’s ton was the second fastest among Aussies after Adam Gilchrist hit a ton against England at this venue off only 57 balls.

The world record of fastest-ever century is held by Viv Richards who achieved the feat against England in Antigua in 1985-86.

With openers firing with such ferocity, Australia’s problems with its top-order appeared a thing of the past. The hosts look a team galloping towards regaining days of their former glory.

From the moment he punched the last delivery of Umesh Yadav’s first over past mid-off for a four, Warner was off the blocks in a flash as he ran like hare between wickets to completely deflate the visitors who were bundled out for just 161 runs.

Virat Kohli (44), Gautam Gambhir (31) and VVS Laxman (31) got the starts but none of them could hang around long enough in yet another abject batting surrender.

Shots flowed like a rapid-fire round from Warner’s blade.

He broke the hold of Zaheer Khan by punching him thrice through the mid-off for boundaries and his confidence now knew no bounds.

R Vinay Kumar began his Test career in the 6th over and Warner hit him over long-on for the first of his three sixes.

A cut through point in Zaheer’s next over helped him reach his half-century. It took him only 36 balls and was studded with six fours and a six.

The mayhem had already started by then. Ishant Sharma was brought in to bowl the 13th over and Warner clearly remembered the argument he had with the lanky pacer earlier in his innings.

After defending the first three deliveries, he smacked the fourth ball bang into the middle of the crowd. In a subsequent over, Sharma was also hit over slips and through mid-wicket for boundaries.

The only scare for Warner came when he was on 80. Aiming to hook a short delivery, Warner played it too early and the ball jammed on to the helmet grill near his left ear.

He needed a prolonged attention in the middle but showed no ill-effects of the blow. The next three deliveries yielded 10 runs, including two fours on either side of the wicket.

Warner jumped into the 90s when he greeted the return of Vinay Kumar with another straight hit and blasted a six two deliveries later to reach his century off 69 balls with 13 fours and three sixes.

He had taken exactly 10 balls after being hit on 80, to reach to the magical three-figure mark. Cowan was an admirable foil at the other end.

It capped a miserable day in the field for the visitors who lasted only 60-odd overs after being put in to bat by Australian skipper Michael Clarke in the morning.

Skipper Mahendra Singh Dhoni also showed his batting has gone from bad to worse at the Test level as he made only 12 runs. The last four Indian wickets fell within a space of 32 deliveries.

Only southpaw Gautam Gambhir tried to put a premium on his wicket and battled for 82 balls in making 31 with three fours. Struggling young batsman Virat Kohli too showed promise in his 44 off 81 balls in 107 minutes and striking six fours.

Ben Hilfenhaus, the tormentor of India in the present series, took 4 for 43 but it was Peter Siddle who put the skids under Indian feet with three crtical scalps of Dravid, Laxman and Kohli.

He took 3 for 42 as Australian pacemen enjoyed another day of dominance over the visitors.

Dravid survived 34 balls but was beaten off most of them, indicating the great No 3 batsman presently is not in the best of form.

The introduction of Siddle finally signalled his exit, in the by now familiar manner as the pacer successfully breached Indian stalwart’s defence. The delivery was pitched full on his leg stump and Dravid, slightly late on the stroke, dragged it back on to his stumps. (PTI)