Currently, SRH are 59 for the loss of no wicket in six overs against RCB in IPL 2016 Final, with David Warner on 31.

Sunrisers Hyderabad (SRH) skipper David Warner scored his 800 runs in the ongoing Indian premier League (IPL) 2016 for the whole season, as he achieved the feat against powerhouse Royal Challengers Bangalore (RCB), in the final at the M Chinnaswamy Stadium in Bengaluru on Sunday. He also became the second batsman after Virat Kohli to achieve the feat. SRH are playing the final for the first time, as they look to claim their maiden IPL title, although a different franchise won it back in 2009 for Hyderabad. Currently, SRH are 59 for the loss of no wicket in six overs, with David Warner on 31, and Shikhar Dhawan on 25. Full Cricket Scorecard: Royal Challengers Bangalore vs Sunrisers Hyderabad, IPL 2016 Final 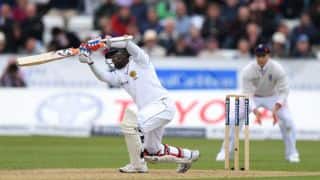 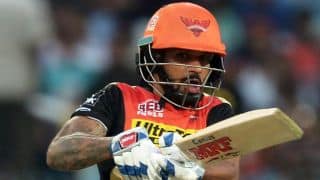