David Warner smashed his 3rd ODI ton as Australia chased down 235 with ease.

David Warner‘s century eclipsed Eoin Morgan‘s effort to help Australia beat England by three wickets in the first One-Day International (ODI) of the tri-series at the Sydney Cricket Ground. Chasing 235 to win, Australia were never really troubled and sailed through to the target. They also won a bonus point as they overhauled the target inside 40 overs. Though the scoreboard shows Australia won by three wickets, one would say that it was a lot more comfortable for the hosts.

Warner’s rich vein of form continued into this game. When Australia were set a target of 235, not many gave England a chance. The way Warner batted, those notions were only confirmed. The other Australian batsmen batted around Warner, who anchored the innings through to the end. In the process, he reached his third ODI ton his first since 2012. He has been in great form through the summer and the fact that it has carried into the one-day series is an encouraging sign for Australia.

Before the Warner show, it was Australia’s day on the park, though Morgan’s brilliant century gave England some hope. Mitchell Starc had rocked the visitors early when he trapped Ian Bell leg-before off the first ball and James Taylor followed. Joe Root and Moeen Ali also fell inside the first ten overs. And, when they were 69 for five at the loss of Bopara’s wicket, England were in serious trouble.

Morgan and Jos Buttler stitched a gritty partnership that helped England recover. Morgan then charged towards the end, getting his seventh ton in ODIs. England were bowled out for 234, which looked a decent score on the day. Starc ended with four wickets, but James Faulkner’s three-wicket haul in the middle-overs also contributed in keeping England under control.

England began their new era in ODIs under Morgan. Though the result was not favourable, they can take heart from the fact that they put up a good fight despite being under the mat for a major part of the game. The interesting aspect of this game was that both the centurions from the Prime Minister’s XI game, Bell and Glenn Maxwell, were dismissed for ducks.

When a disgusted Hansie Cronje attacked umpire’s dressing room door with a stump! 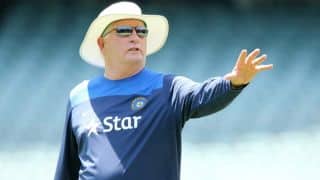