Warner required surgery to remove a bone spur and loose bone that had caused inflammation.

Australia s David Warner is likely to regain full fitness in a month after undergoing a minor surgery on his elbow, that cut short his Bangladesh Premier League stint.

Warner required surgery to remove a bone spur and loose bone that had caused inflammation.

“David Warner underwent surgery yesterday to remove a bone spur and loose bone in his elbow that was causing an inflamed joint,” a CA spokesman said. “David will undergo rehabilitation in which we expect him to be able to begin moving his arm by the end of the week, and within 3-4 weeks resume batting, with his return to playing to be determined soon after that.”

Warner, suspended for 12 months from international cricket and Australia s domestic cricket after ball-tampering row, will most likely be available for selection Australia for the final two one-dayers against Pakistan in the UAE. The left-hander s suspension ends on March 23.

Both Warner and Steve Smith left the BPL midway with the former Australian skipper also undergoing an elbow injury. However, despite a successful surgery, he faces a race against time to regain fitness ODI series against Pakistan which will be Australia s final outing before the defending champions head to England and Wales for the ICC World Cup 2019.

Smith s rehabilitation process will begin in February. It s unlikely that the he will be fit for competitive cricket when his suspension expires. He is also expected to miss out playing for the Rajasthan Royals (RR) in the Indian Premier League (IPL) this year.

“I spoke to them both last night actually,” Australia coach Justin Langer told SEN on Tuesday. “I think Davey is going to get a clean-up, I don’t think Davey’s is as serious as Steve’s was. That said, Steve is in a brace for the next 5-6 weeks I think.

“What we do know about them is, they haven’t been good players, they’ve been great players for Australia. We are obviously monitoring them very closely and we are hopeful they will be getting themselves fit and strong and putting their name up for selection. It’s an exciting time coming up,” Langer said. 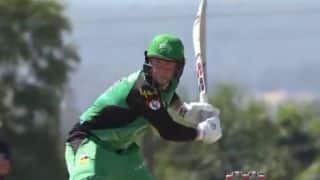