He said Australia will try to reverse swing the ball in their second innings to take 10 Indian wickers.

Australia opener David Warner has said his team is unlikely to declare on the overnight score of 261 for seven, a lead of 326 runs, to give its bowlers enough time to bowl India out on the fifth and final day of the third Test here.

“I think we need a few more runs than what we’ve got on the board at the moment,” Warner said Monday.

“It’s still a very good batting wicket. The ball’s coming on nicely, there’s not much sideways movement with the new ball. I think as the ball gets older and a little bit softer, there’s a bit of reverse swing, as we saw late in the day today.”

Warner said his team is aware of India‘s batting might which is why it is unwilling to declare on the overnight score. “We saw in the Adelaide Test how well they fought there,” Warner said.

“Luckily we got the breakthrough because it could have been a different story; they would have went 1-0 up. We know what their batting line-up is like.”

The batsman specially named first-innings centurions Virat Kohli and Ajinkya Rahane as the men to watch out for.

“Kohli and Rahane put on a great partnership together (on day three). They had their luck but they went on with it and got big scores and that’s in the back of our minds,” he said.

“We know the positive brand of cricket that they’re playing now and we’ve got to come out with the ball when we have our opportunity to either dry it up or try and take those 10 wickets.”

He said Australia will try to reverse swing the ball in their second innings to take 10 Indian wickers.

“I think that’s probably going to be the key when we take the field with the ball – to try and get that ball going a little bit and obviously dry up the runs and get 10 opportunities. I think that’s the way that we’re going to try and win the game,” the left-hander said. 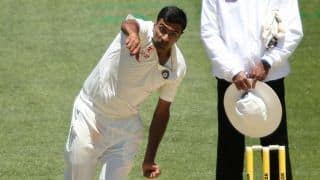 Ravichandran Ashwin believes India can chase down any target