Warner is due to appear in Allan Border Medal count in Melbourne on Monday, before heading home on Tuesday.

Struggling to score runs, Australia s stand-in skipper David Warner is likely to be given a break ahead of their next match in the Trans-Tasman Tri-Nation T20I series. Warner has so far led his side to 3 victories to ensure a place in final. Warner has been the only player to feature in all three formats for Australia this summer. Before heading home on Tuesday, Warner is due to appear in Allan Border Medal night at Melbourne on Monday.

“He’d obviously like some more runs but he’s been fantastic in the leadership role with the young guys. “He’s been training hard … there’s no dramas at the moment. He can only do so much work … he’s been working so hard that it’s almost like (it would help) to just give him a couple of days away from the game. Ricky Ponting (Australia’s assistant coach) has been doing some really good work with him, so we’d expect him to come out of that rut pretty quickly.”

Australia s next game is on the February 16 against New Zealand in New Zealand. A tale of Ernie Jones and two sparrows 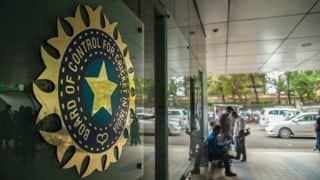