Australia have ended the first session of 3rd Test against South Africa on top.

David Warner ensured Australia dominated the first session of the much-anticipated third Test against and South Africa. He drove and cut, pulled and punched with panache, and remained largely untroubled as he conjured an unbeaten 75 at over a-run-a-ball. Australia finished on 118 for one with Warner looking ominous in the serene presence of Alex Doolan.

Warner and Chris Rogers tore into Dale Steyn and Vernon Philander from the moment they set their feet on the ground, throwing their bats at almost everything. They picked out Steyn in particular, taking 17 off his first two overs as Graeme Smith had to take him off.

Morne Morkel started the fightback, bowling at a screaming pace and making the ball take off from a length. However, whenever he pitched anything up both Rogers and Warner were severe on them.

Smith brought on JP Duminy in the tenth over, but the ploy did not work: runs were scored at ease, and he was replaced by Kyle Abbott, playing only his second Test after his heroics against Pakistan last year.

Then Smith brought back Steyn to replace Morkel, and the great man struck with his third ball: the ball was not there to drive but Rogers still went for it, the edge flying to Smith at first slip. Smith took a sharp catch to his left.

Warner was duly rewarded with a fifty — albeit in an unconventional way: Warner pushed Steyn to mid-on, Philander threw the stumps down, and the ball ricocheted off the stumps though the vast acres of space at extra-cover. Not many people reach their fifties with fives!

One would have expected Warner to pull himself back a bit, but he kept on playing his strokes, playing an exquisite cover-drive off a length delivery from Steyn. Doolan hit a superb back-foot punch off Abbott before there was a loud appeal for leg-before: Smith did not review, and the replays suggested an inside edge. Doolan responded immediately by pulling Abbott to the fence.

Doolan justified the faith the selectors had shown in him by picking him ahead of Shaun Marsh. Philander tried to bounce him out, but the ball went way above AB de Villiers’ head for five wides. Barring Morkel’s first spell and a short burst from Abbott, the South African attack has looked too flat to create an impact of any sort. 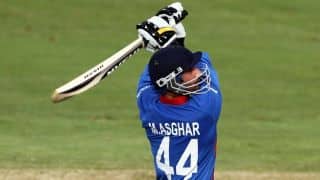 ICC Under-19 World Cup 2014 final: Corbin Bosch stars as Pakistan bundled out for 131