RCB captain Virat Kohli was not happy with his bowlers' performance and felt his team's total was 20 runs short.

Bangalore: He was the deserving Man of the Match award winner for his explosive half-century but SunRisers Hyderabad skipper David Warner gave credit to his bowlers for setting up the win over Royal Challengers Bangalore (RCB) in the Indian Premier League (IPL) 2015 on Monday. Sunrisers rode on Warner’s 27-ball 57 and Trent Boult‘s three-wicket burst in RCB innings’ penultimate over to defeat the hosts by eight wickets after bowling them out for 166. Match Report: RCB vs SRH

“What a performance from the bowlers. The ball was swinging and the bowlers did well to pull things back. The spell from Boult and Bhuvi was brilliant,” Warner said at the post-match presentation ceremony. Warner also took a stunning catch to set the ball rolling for his team. Full Scorecard: Royal Challengers Bangalore vs Sunrisers Hyderabad

“We pride ourselves on fielding, it is 50 percent of the game. If we get our fielding right, bowling and batting will take care of itself. Credit to the bowlers, they gave us a nice total to chase,” the Australian said. He also praised his opening partner Shikhar Dhawan, who remained unbeaten with a 42-ball 50. “I played with freedom and it was great knock from Shikhar. We are in a good place now and ready for our home games.” Highlights:”RCB vs SRH

RCB captain Virat Kohli was not happy with his bowlers’ performance and felt his team’s total was 20 runs short. “We were just not good enough with the ball. Maybe 20 runs short with the bat. The guys were off the button today. Hopefully, we can pull our socks up and come back stronger. We have a lot of freebies. I think the bowlers themselves will know that they were not good enough,” Kohli said. IPL 2015: Complete Coverage

He further added, “With the bat we got close to 170, maybe it was a 180-185 wicket. We will have to improve with the ball. I guess Adam Milne will be fit for the next game and Mitch will be coming in to boost the attack. As long as the boys are willing to improve, it’s all good.” 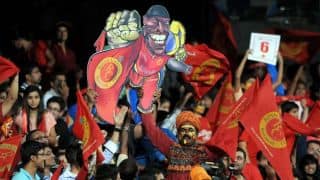