David Warner's future as a member of the Australia tour party in England was in the balance following his bar-room attack on England's Joe Root. According to the BBC, David Warner (above) swung a punch at Joe Root, who took a glancing blow to the chin © Getty Images

David Warner‘s future as a member of the Australia tour party in England was in the balance following his bar-room attack on England’s Joe Root.

Warner was dropped from title-holders Australia’s rain-marred no result Champions Trophy Group A match against New Zealand on Wednesday but carried drinks onto the field at Edgbaston as 12th man.

Earlier, Cricket Australia (CA) said opening batsman Warner had been reported for breaching its code of  conduct relating to “unbecoming behaviour” after a “physical altercation” with an unnamed England player on Sunday.

Warner now faces a CA disciplinary hearing, due to take place before the weekend, which could see the talented left-hander, in Australia’s squad for the Ashes, sent home ahead of the first Test against England in Nottingham starting on July 10.

Last month Warner, was found guilty of breaching the CA code for an expletive-laden Twitter tirade directed at two Australian cricket journalists after a story about corruption and fixing in the Indian Premier League was illustrated with a picture of him and fined Aus$5,750 (US$5,608, £3,700).

Significantly, four Australia players were dropped by coach Mickey Arthur for the third Test in India in March.

The South African was angry that Shane Watson, James Pattinson, Mitchell Johnson and Usman Khawaja didn’t submit feedback requested by team management during the course of a series Australia lost 4-0.

“This is a line in the sand moment,” Arthur said at the time. “A point we’ll look back on in a couple of years’ time when we’re back to number one in the world and say was a defining moment.”

Australia stand-in captain George Bailey, leading the side in the absence of the injured Michael Clarke, defended Warner’s behaviour by saying he’d been involved in a “very minor incident”.

“From my point of view it’s disappointing but it’s a very minor incident and it’s being dealt with in-house,” Bailey said after Wednesday’s wash-out left Australia’s hopes of reaching the semi-finals hanging by a thread.

“I love playing cricket with him [Warner],” Bailey added. “I wish I had the talent he does.”

Bailey said he had no qualms regarding Warner’s presence at Edgbaston. “Certainly not from the team perspective. I thought he took it on the chin… no pun intended,” added Bailey.

Asked if he felt Warner had “a short fuse”, Bailey replied “not at all”.

New Zealand captain Brendon McCullum refused to be drawn on Warner’s behaviour, saying: “I started  hearing a bit of a whisper late last [Tuesday] night and this [Wednesday] morning but it’s really got nothing to do with us and I don’t want to speculate on something we don’t know anything about either.”

“People are talking about him but the whole network, structure, captain, management, supporters, are all tarred with the same brush because of what that one individual has done to the team.”

Meanwhile current England skipper Cook told reporters ahead of England’s next match against Sri Lanka at The Oval on Thursday that “Joe seems fine.”

Cook added: “We have investigated the matter, we believe we have not done anything wrong.”

The BBC reported Warner swung a punch at Root, who took a glancing blow to the chin, while players from both sides were in the Australian theme bar Walkabout in Birmingham’s entertainment district between 1:30am (0030 GMT) and 2:30am.

The England and Wales Cricket Board (ECB) said in a statement Warner “initiated an unprovoked physical attack” after England’s 48-run victory at Edgbaston on Saturday.

“Warner has admitted behaving inappropriately and has since apologised to the player involved who has accepted the apology,” the ECB added.

“Following a full investigation the England team management has concluded that the England player was in no way responsible for nor retaliated to the attack.”

Warner struggled against England, scoring only nine runs in 21 balls. He also failed to score in warm-up games against India and West Indies.

In One-Day Internationals, Warner averages 29.81 from 38 innings, with a strike rate of 80.58. In Tests, he has made three centuries and seven fifties in 19 appearances, averaging 39.46. 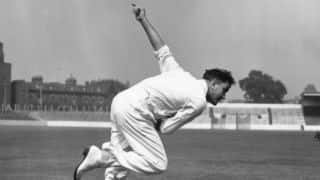