Currently, SRH are 88 for the loss of a wicket in nine overs against RCB in IPL 2016 Final, with David Warner on 52.

Sunrisers Hyderabad (SRH) opener and skipper David Warner scored his half-century, against powerhouse Royal Challengers Bangalore (RCB), in the final of the ongoing Indian Premier League (IPL) 2016, at the M Chinnaswamy Stadium in Bengaluru on Sunday. His fifty came off 24 deliveries, including five boundaries and three sixes, along with a strike rate of 215. Earlier, he also scored his 800 runs in the season, thus becoming the seco0nd batsmen to fdo so this season. Currently, SRH are 88 for the loss of a wicket in nine overs, with David Warner on 52, and Moises Henriques on four. Full Cricket Scorecard: Royal Challengers Bangalore vs Sunrisers Hyderabad, IPL 2016 Final 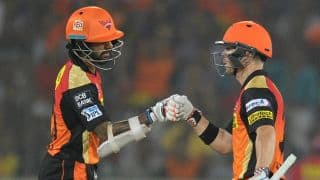 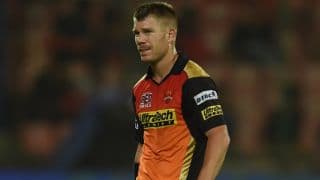