David Warner brought up his century off just 78 deliveries on the opening day of the third Test against Pakistan.

David Warner s 78-ball ton has given Australia an early initiative as they go to lunch on Day 1 f the third Test at Sydney at 126 for no loss. Warner got to his fifty off just 42 deliveries, within the first hour of the day s play and Australia reached their 100 in just 21 overs. He also became the fifth player after Victor Trumper, Don Bradman, Charles Macartney and Majid Khan to score a century before lunch on Day One of a Test. Warner s partner Matt Renshaw n the other hand has played a steady innings and unlike Warner, he has not gone all guns blazing.

Warner went after the bowlers right from the beginning. Pakistan opening bowlers, especially Imran Khan took a severe beating. His first 4 overs went of 31, but returned to bowl much better in his second spell. With the opening bowlers being belted for runs, Pakistan skipper Misbah-ul-Haq brought Wahab Riaz and leg-spinner Yasir Shah to restore some control. Pakistan did cut down the run flow, but Warner was picking his spots well and at the same time gave good deliveries its due respect. Renshaw was a little more circumspect, but did not hesitate on dispatching the bad deliveries when it came his way. Renshaw was however content in blocking most of his deliveries. That did not change the way Warner went about his innings.

He eventually played the ball between third man and deep point to run three and become the first batsman ever to score a century before lunch on the opening day of the Test on Australian soil, to ensure his side ended the session on a high.

Earlier, Australia captain Steven Smith, in his 50th Test had won the toss and elected to bat first. Australia announced their playing XI on Monday. They have roped in spinner Steve O Keefe in place of Jackson Bird. Also, all-rounder Hilton Cartwright makes his Test debut in place of Nic Maddinson. Pakistan on the other hand have nothing but pride to play for in this Test as they have already lost the series. They too have a debutant in Sharjeel Khan, who might partner Azhar Ali at the top of the innings. Pakistan have also brought in fast bowler Imran Khan in place of Sohail Khan. Surprisingly, they have gone in with just one specialist spinner in Yasir, unlike Australia, who have Nathan Lyon and O Keefe. 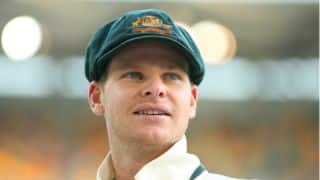 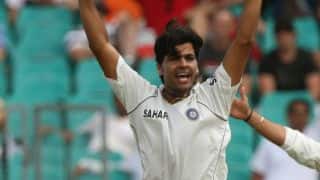